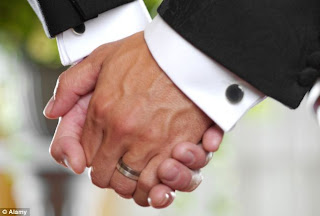 With France well on its way to adopting full same sex marriage, the reactionary Christofascist elements in the Tory Party in the United Kingdom are pitching a fit over Prime Minister David Cameron's planned vote on marriage equality this week in Parliament.  Cameron seems undeterred by the 25 or so knuckle draggers who are demanding the delay and the UK's Secretary of State for Education, Michael Gove, has authored an op-ed that argues that gay marriage strengthens the institution contrary to the wailing and whining of the religious bigots opposing the legislation.  Given the fine mess that straights have made of the institution of marriage, the argument that civil marriage for same sex couples somehow undermines the institution are ludicrous.  Stripped of all the manufactured smoke screens, opposition to marriage equality boils down to one thing: anti-gay animus and a long standing desire to keep gays stigmatized and second class citizens under the civil law.  First some highlights from Reuters on the efforts of the Christofascists to delay the marriage vote:

Cameron has pledged his personal support for a gay marriage bill but many in his party and among his legislators oppose it on moral grounds and say the government has no mandate to push it through parliament.

As the bill is supported by Britain's two other main parties, opposition Labor and Conservative coalition partners the Liberal Democrats, it is in no danger of being defeated.

But a letter signed by 25 past and present chairmen of local Conservative associations was handed in to Cameron's Downing Street residence on Sunday afternoon by six of the signatories.


"We feel very strongly that the decision to bring this bill before parliament has been made without adequate debate or consultation with either the membership of the Conservative Party or with the country at large," the letter said.  It added: "Resignations from the party are beginning to multiply and we fear that, if enacted, this bill will lead to significant damage to the Conservative Party in the run-up to the 2015 election."

The issue has sparked heated debate in Britain, particularly among faith groups, but 55 percent of British people support same-sex marriage, according to a YouGov poll in December.

It’s wrong to say to gay men and women that their love is less legitimate. It’s wrong to say that because of how you love and who you love, you are not entitled to the same rights as others. It’s wrong because inequality is wrong. Some people might think it curious that a Tory politician should be making these arguments. But I want to change the law on marriage because of my Conservative convictions.

I believe that marriage should be defended, supported and promoted in every way. A society which believes in commitment and which seeks to encourage us to think beyond the short term, which encourages people to put the enduring above the convenient, and which asks people to put stability in personal relationships ahead of self-interest, is a healthier society.

As Education Secretary I am responsible for child protection policy and every day I see the consequences of family breakdown. When parents run away from their responsibilities, children suffer. That is why I am so determined to change things so that more children are rescued from abusive homes and adopted by loving families. In all of this work I am constantly reminded of how important it is to support those who make a public commitment to each other – and the best way of doing that is through supporting marriage. Marriage is not undermined by extending it to gay people – it is reinforced by including everyone equally.

The real threat to marriage comes from social forces that encourage selfishness and short-termism. More people making a lifelong commitment to each other helps us turn that tide.

There’s another reason why I support change. I’m a Conservative because I believe in making opportunity more equal. The Conservatives had the first Jewish and female leaders, Conservatives led the fight to abolish slavery, and massively extended property ownership and access to higher education.

Parliament has an opportunity next week to strengthen the institution of marriage, uphold the principle of equality before the law, affirm our belief in commitment, demonstrate that we value all citizens equally and declare our belief in the transformative power of human love. I hope we can vote for those values in decisive terms.

The other irony not addressed is that reality that in America, organizations like Family Research Council and NOM whine incessantly about "children needing a mother and father" yet they don't spend a dime on expanding adoption services to reduce the number of children languishing in foster care some of whom will never know a permanent home.  Instead they pay themselves obscene salaries - e.g., Brian Brown at NOM reportedly pocketed $500,000 in 2012 - focus their efforts on disseminating anti-gay animus and creating racial division.  I suspect if Christ were living today, he would be calling out the Christofascists for the modern day Pharisees that they are and joining the pro-gay marriage effort.