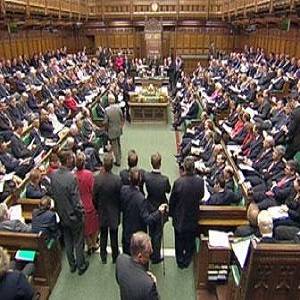 Following action in the French Parliament a little over a week earlier the British House of Commons has voted to pass same sex marriage by 400 to 175 with many members of the Tory Party rebelling against Prime Minister David Cameron.  Here are details from Pink News in the UK:

MPs have voted 400 to 175 in supporting the government’s Marriage (Same Sex Couples) Bill - a majority of 225 votes - following an afternoon of heated debate in the House of Commons.

Initial estimates suggest 132 Conservative MPs voted for the bill, 139 vote against, with the rest abstaining.

The bill would enable same-sex couples to get married in both civil and religious ceremonies, where a religious institution had formally consented, in England and Wales.

It would also allow couples who had previously entered into civil partnerships to convert their relationship into a marriage.

The bill will now proceed to a parliamentary committee for further scrutiny.


It goes without saying the Christofascist elements in the U.K. will be wailing and predicting that the world will now end.