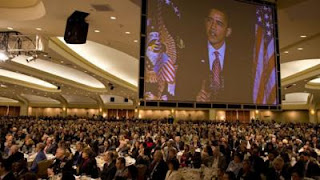 In what seems like a case of deja vu following Barack Obama's election in 2008, Obama is back fraternizing with some of the nastiest elements of the Christofascist far right.  As if anything the man could do other than perhaps die would ever make the Christofascists like him.  The latest example of Obama's batshitery on this front is his attendance at the National Prayer Breakfast sponsored by The Family - an ominous Christofascist group that has ties to and has funded many of the anti-gay extremists in Africa not to mention allegiances with hate groups like Family Research Council.  Not surprisingly, many progressives are NOT happy with Mr. Obama and his latest self-prostitution to the forces of hate and extremism.  You simply cannot have it both ways Mr. Obama.  Here are excerpts from a Huffington Post piece:

Thursday's Prayer Breakfast in Washington, D.C., is an annual event hosted by the Fellowship Foundation, otherwise known as "the Family." According to The Philadelphia Inquirer, the Family is a conservative Christian group that has supported anti-gay legislation around the world and has ties with Ugandan official David Bahati, whose infamous "Kill the Gays" bill could impose the death penalty for those in same-sex relationships.

Gay rights activists have opposed Obama's appearance at the event.  “We would love for the President to come out and join us at the 'Breakfast without Bigotry,'” Michael Dixon, a member of LGBT rights group GetEqualDC, told CNN at the 2011 Prayer Breakfast, where GetEqual and 30 other demonstrators said prayers for Ugandan gay activist David Kato, who was brutally bludgeoned to death in 2011.

“The values the Family is actually espousing could not be further from what Jesus would actually support," Dixon previously told CNN. "We feel that persecuting people because of the way that they were born, trying to have them imprisoned for life, trying to execute them, is not Christian and it’s not a family value in any sense of the word.”

Obama's attending the Prayer Breakfast on Thursday, therefore, seemed to juxtapose his support for equality, a stance he historically backed at his second inauguration ceremony last month.

"I confess that I haven't focused on this," [White House Press Secretary] Carney told reporters of the the Family's anti-gay links, according to Metro Weekly. "The president, as his predecessors have, participates in this. He's not responsible for the views of every organization or person who participates. His views on these issues, as you just noted in your question, are quite clear."

Gay rights groups also opposed the National Prayer Breakfast in 2010, when Citizens for Responsibility and Ethics in Washington (CREW) asked for congressional leaders to boycott the event. Gay rights groups responded with their own prayer events in 17 cities across the nation, according to Time.