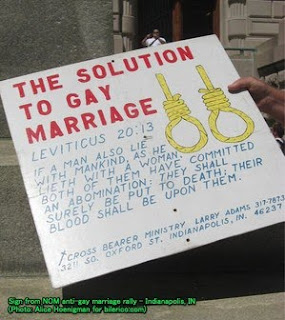 I have often maintained that the Christian Right, White Supremacy groups, Tea Party and anti-Immigrant groups have all more or less coalesced into basically one Christofascist/white supremacy under the banner of the GOP.   The factions are unified by who they hate - which is everyone who isn't a white evangelical/fundamentalist Christian - and as yet further proof of this reality a group of wing nut/racist/anti-gay organizations have teamed up to file amicus briefs in the DOMA and Proposition 8 cases pending before the U. S. Supreme Court.  As one might expect, the batshitery is off the charts and might actual help those seeking to see both DOMA and Prop 8 struck down since they show the clear animus that motivates those in favor of the anti-gay laws.  Right Wing Watch looks at these deranged briefs that represent a who's who of the lunatic fringe.  Besides being anti-gay, they want the Supreme Court's desegregation rulings reversed, along with past equal protection decisions.  Here are highlights:

Citizens United’s National Committee for Family, Faith and Prayer filed two no-holds-barred amicus briefs last week, one in defense of Prop 8 [pdf] and one in defense of DOMA [pdf]. They were joined in both by the anti-immigrant groups Declaration Alliance and English First; WorldNetDaily affiliate the Western Center for Journalism; the Institute for Constitutional Values (founded by white supremacist ally Michael Peroutka, who also argues that the solution to school violence is to abolish schools); Gun Owners Foundation (the research wing of Gun Owners of America); the extremely and occasionally comically anti-gay Public Advocate; the birther group U.S. Justice Foundation; Protect Marriage Maryland and others. Far-right Virginia Del. Bob Marshall and Sen. Dick Black joined the DOMA brief. Both are signed by Michael Boos, general counsel of Citizens United, and by Herb Titus, an attorney with a sideline as a birther advocate [who son is doing 30 years for a ponzi scheme].

So I guess we shouldn’t be surprised that the filings contain passages like this one, in the Prop 8 brief, arguing that laws against homosexuality affirm rather than deny the humanity of gay people:


Second, while the discrimination against Blacks in America denied them their rightful status as a member of the human race vis-à-vis their white counterparts, the discrimination against homosexuals affirmed their status as full and equal members of the human race. Indeed, the very definition of the “crime against nature,” was employed to emphasize that the sexual behavior condemned was contrary to the law of human nature. Homosexual behavior, then, while unnatural did not mean that those guilty of it were any less human.


Or this one from the DOMA brief arguing that gays and lesbians have not historically faced discrimination because some criminal sodomy laws also “extended to opposite sex unnatural couplings”:


As a class, homosexuals have not been discriminated against in the way that the court of appeals has so “easily” assumed. The appellate panel below concluded that “the most telling proof of animus and discrimination is that, for many years and in many states, homosexual conduct was criminal.” Yet historically, even the crime of sodomy was not so targeted. Rather, it was defined as “carnal copulation against the order of nature by man with man; or in the same unnatural manner with woman; or by man or woman in any manner with a beast.”

But what is truly remarkable about the Citizens United coalition’s legal arguments is their eagerness to burn all bridges and declare everything they come across unconstitutional.  .  .  .  .  Not only should Lawrence and Romer be overturned, this group argues, but so should Bolling v. Sharpe, the 1954 Brown v. Board companion case that desegregated the District of Columbia’s public schools. Bolling was the first decision in which the Supreme Court explicitly found an equal protection component in the Fifth Amendment’s Due Process Clause, thus setting the stage for six decades of prohibitions on discrimination by the federal government – all of which the coalition would like to see go.

But these groups don’t just go after decades of legal precedent. They also personally attack two judges who ruled against Prop 8 before it reached the Supreme Court, in particular district court judge Vaughn Walker, who is openly gay:

With the understanding of Judge Walker’s personal interest in the outcome of the case, it becomes much easier to understand his finding every fact for the plaintiffs and his willingness to impute ill will to the proponents of Proposition 8. For example, having in his personal life rejected 6,000 years of moral and religious teaching, we can see how Judge Walker could readily determine that California voters were motivated solely by “moral and religious views…that same-sex couples are different from opposite-sex couples [and] these interests do not provide a rational basis for supporting Proposition 8.”  .  .  .  .  Petitioners were entitled to have their case heard by an impartial judge – not one who was leading a secret life engaging in behaviors which he appeared to believe were being unfairly judged and criticized by the proponents of Proposition 8.

To say that these groups and their members are unhinged and scary is an understatement.