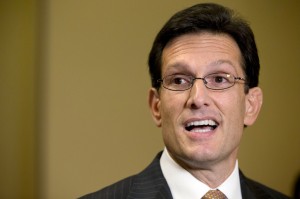 Here in Virginia outside of perhaps Del. Bob Marshall and Attorney General Ken "Kookinelli" Cuccinelli there are few Republican politicians who are more sleazy and contemptuous of the rights of the majority of citizens than Eric Cantor.  While Jewish, like his Chriastofascist masters the best approach to Cantor is to assume that if his lips are moving, he's lying.  All of this was demonstrated during Cantor's recent blather about the GOP needing to work at creating the conditions for health, happiness and prosperity for more Americans.  The problem is that Cantor's and the GOP's policies are directly opposite from this supposed agenda.  Oh they want some Americans to be more happy and prosperous: the very wealthy.  The rest of us?  We're on our own and best hope we don't end up living on the streets subsisting on dry dog food in our old age.  A column in the Washington Post looks at Cantor's latest lies and bullshit.  Here are highlights:

Republicans have happened upon a felicitous new strategy for reviving their party from its depressed state: They need only think happy thoughts.  At a retreat for Republican leaders last month, former House speaker Newt Gingrich told them to “learn to be a happy party” and a “cheerful” one, and Republican National Committee Chairman Reince Priebus said they should be a party “that smiles.”

House Majority Leader Eric Cantor took this don’t­worry-be-happy strategy seriously, and in a heavily promoted “major” speech to the American Enterprise Institute on Tuesday afternoon, he let the sun shine in.

He began with an uplifting anecdote about the Wright brothers and quoted the inspirational words of Emma Lazarus. He spoke from a lectern decorated with a foam board carrying the slogan “Making life work for more people” and brought with him some everyday folks to illustrate his upbeat philosophy, including an African American father who found a better education for his children and a girl doing well in her battle with cancer.

“The House majority will pursue an agenda based on a shared vision of creating the conditions for health, happiness and prosperity for more Americans,” Cantor proclaimed. He also read a Thomas Jefferson quotation on “ameliorating the condition, promoting the virtue, and advancing the happiness of man.”

But the sunny routine was a difficult one for Cantor, who has made a career in Washington of being testy and acidic. His delivery was forced and, as he read his text, he seemed to be reminding himself to grin. As a result, he scowled for much of the speech and sounded as though he were spitting out his words. Smiles formed at inopportune times, such as when he described a boy’s failure in public school.

When it came to what his party would do to make people so buoyant and uplifted, Cantor had little beyond the policies he and his colleagues have long offered.

In recent weeks, Republican leaders such as Cantor have resembled nothing so much as laundry detergent salesmen, figuring if they can simply rebrand their product (High Efficiency 2x Ultra Stainlifter Clean Breeze Concentrated Fresh!) Americans will buy what they’re selling. Omitted from consideration is the possibility that consumers don’t like what’s in the bottle.

Problem is, the optimistic talk collides with grim realities. Cantor spoke Tuesday about Lady Liberty lifting her “lamp beside the golden door,” but he was noncommittal on the comprehensive immigration reforms drafted by Sen. Marco Rubio (R-Fla.). He spoke about how “many of today’s cures and lifesaving treatments are a result of an initial federal investment” without mentioning that the House Republicans’ budgets would decimate medical research.

Cantor spoke about how health care “always worries parents most.” But he continued to advocate the repeal of Obamacare, even though Ohio’s conservative governor, John Kasich,


As I noted at the outset, if Cantor's lips are moving, he's lying.  The man is despicable.