What Actually Happens in ‘Ex-Gay’ Therapy 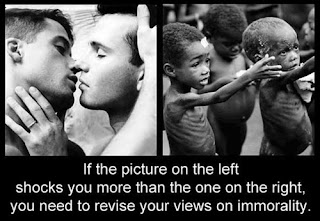 As noted on this blog, the United Nations has for the first time begun examining so-called "ex-gay" therapy and may well eventually come to condemn the practice.  Meanwhile a California law that bans the use of the witch doctor like therapy is being challenged in court by snake oil merchants who have found the "therapy" a useful means to self-enrichment with little care for what ultimately happens to their client.  Their sole goals are (1) money and (2) keeping the myth alive that being gay is a "choice" or "lifestyle" - claims that are repeated over and over again in the briefs filed by anti-gay forces in the DOMA and Proposition 8 cases now before the U.S. Supreme Court.  Given the dishonesty of the "godly Christians" who champion this bogus therapy, it is useful to look at what really happens during the course of such therapy.  A former patient of a reparative therapist - who won an out of court settlement against his therapist - provides a peak at the cruel batshitery that is the norm in such programs.  Here are excepts:

There’s no doubt that with the California state legislature passing a bill to ban therapies aimed at trying to “change” the sexual orientation of minors, “reparative therapy” is once again going to make headlines. I was in a form of reparative therapy in British Columbia, Canada, for six years, after which I filed a medical malpractice suit against my former psychiatrist, “Dr. Alfonzo,” for treating my homosexuality as a disease.

In 1989 I entered Dr. Alfonzo’s care after coming out as gay and being rejected by my family. Within months, Alfonzo presented me with conflicting causation theories, said that I would never be happy as a homosexual, that my same-sex desires were the result of faulty parenting, and so my body had been trained, “through years of homosexual activity,” to respond only to men.

The idea that reparative therapy “repairs” anything, let alone changes erotic desire, is, to paraphrase author Joan Didion, a story we have told ourselves in order to survive. When we talk about reparative therapy we are really talking about suppression of desire, about dissociation, depersonalization—we are talking about the incommensurable trauma that lives on in the person who has undergone what I now consider to be psychic lobotomy, where the “surgeon” probes into the psychosexuality of the individual, cutting and scarring their way toward the establishment of a “different” sexuality, while the “patient,” severely undermined by lifelong messages of heteronormativity, becomes co-conspirator in their own loss of agency.

Enacting laws to make it illegal to practice reparative therapy on anyone under the age of 18 is only a start.

So much pain and so much suffering - all so that the Christofascist can feel superior about themselves and not have to face the reality that the passages in their all too fallible Bible about homosexuality are false.  They are the writings of ignorant nomads and herders that have no place in the modern world.  They need to be discarded like so much else in the Leviticus code have already been discarded.