Karl Rove vs. the Tea Party 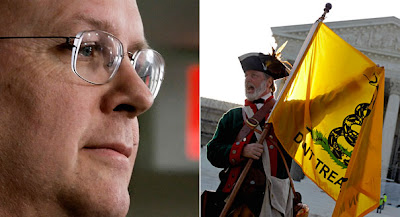 Make no mistake - I loath Karl Rove and view him as a disgusting human being not the least because he helped whip the far right and GOP into an anti-gay frenzy not too many years ago.  But now Rove appears headed toward trying to tame the Frankenstein monster that he helped create which has taken over the GOP: the Christofascist/Tea Party element of the party.  I include the Christofascists with the Tea Party because some 85% of the Tea Party crowd also identify as "conservative Christians."  In the 2012 elections, Rove masterminded some $300 million in spending for GOP candidates, yet at the end of the day had almost nothing to show for his effort thanks to Mitt Romney's pandering to the  Christofascists/Tea Party and the nomination of lunatic candidates by the Christofascists/Tea Party, most notably Todd Akin and Richard Mourdoch.   A piece in Politico looks at Roves effort to drive a spike through the heart of the metastasizing cancer that has overtaken the GOP.  Here are some excerpts:

The message from Karl Rove’s allies to rich donors is pretty simple: We need your cash to avoid repeating the problems that tanked our $300 million 2012 effort, and we can promise you anonymity.

The Conservative Victory Project, the new spin-off from Rove’s Crossroads groups, will consist of a super PAC that discloses its donations, and POLITICO has learned it will also include a tax-exempt group that allows it to shield donors.

In essence, this is the GOP establishment’s attempt to make candidates for Republican nominations prove themselves before blowing winnable elections like Todd Akin and Christine O’Donnell, and Rove’s allies hope the combination of cash and scrutiny does the trick.

“This is a bad idea whose time has come,” former Mississippi Gov. Haley Barbour, a powerhouse fundraiser for Crossroads, said of the new organization, according to an email Monday to donors from Steven Law, head of the Crossroads groups and Conservative Victory Project.

Law outlined plans to essentially perform oppo research and grade potential candidates on a variety of factors that might affect their ability to win a general election contest, including using fundraising reports “like earnings calls” to evaluate “the competitiveness of candidates.” And he signaled that Crossroads would mobilize other big-money groups in its network to help avert damaging primaries.

Minnesota media mogul Stan Hubbard, who has written big checks to Crossroads and other conservative groups, said the GOP has had too many candidates who are “nut cases” and pledged to donate and raise money for Conservative Victory Project.  “Some areas obviously are more conservative in their constituencies than others,” Hubbard said. “But I don’t think anybody anywhere with any sense is going to want to elect a candidate who says, ‘If your daughter gets raped, it’s God’s will’,” he said, referring to Richard Mourdock

The resulting battle would pit two well-funded factions of the conservative base against one another in a set of expensive primaries that could drain resources, produce weakened nominees and set back the GOP’s chances to retake the Senate and protect its House majority. And it would further complicate already tricky efforts to carefully reposition the GOP on hot-button issues like immigration, gun control and fiscal policy.

FreedomWorks, the Club for Growth, Senate Conservatives Fund, American Majority Action, Tea Party Express and the Family Research Council combined to spend $137 million for the 2012 cycle, according to a POLITICO analysis of tax and campaign filings and interviews — meaning they could mount major efforts against Conservative Victory Project.

Not all the conservative groups balking at Rove’s plan share the exact same agenda, of course. But they are united by their opposition to a primary strategy focused on electability and handed down from inside the Beltway.

There's more to the article, but the foregoing certainly suggests that there may be some entertainment ahead as the GOP fights a civil war.  I do not see the Christofascists and Tea Party crowd going quietly.

Posted by Michael-in-Norfolk at Thursday, February 07, 2013