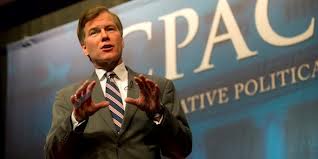 Anyone who commutes during rush hour in Hampton Roads or Northern Virginia knows that Virginia's transportation system is not only inadequate, it's also crumbling (e.g., the potholes on east bound Interstate 64 in Norfolk between the HRBT and the Granby Street exit that I drive each day  make the pavement look like its been bombed in places).  Meanwhile, the state's gasoline tax hasn't been raised in over a quarter century in keeping with the GOP's no tax increase mantra.  And rather than increase the gas tax, Bob "Taliban Bob" McDonnell wants to scrap the tax, increase the state sales tax, and raid funds for already stretched programs.  It's idiocy that so far has been blocked by the Virginia Senate.  Now, the petroleum association that represents gasoline retailers statewide has come out in support of an increase in the gas tax and displayed far more logic than Taliban Bob. Here are highlights from a Virginian Pilot article:

How desperate are Virginians for a statewide transportation funding solution?  Here's one example: a trade group that represents gas stations is bucking tradition and backing a higher fuel tax to pump new money into state road building accounts.

The Virginia Petroleum, Convenience and Grocery Association this week has expressed support for raising the state's 17.5 cent per gallon gas tax to 23.5 cents starting in July. More than 25 years have passed since the state's gas tax was last adjusted.

In a statement, the group cited the mushrooming maintenance deficit that has required Virginia to increasingly spent more of its road construction dollars to repair its decaying road network,
"Should this continue it will eventually impact the productivity of our membership and other Virginia businesses, and affect the quality of life for many Virginians," the Feb. 7 statement reads.

The association also said it would work toward "consensus legislation for the 2014 General Assembly session that adjusts Virginia’s cents per gallon rate along with the biennial state budget, to accommodate the increase in federal gasoline efficiency standards for all passenger vehicles."

The transportation funding plan still alive in the General Assembly is the House of Delegates' version of Gov. Bob McDonnell's proposal to dump the current gas tax and replace it by increasing the state sales tax from 5 percent to 5.8 percent, among other plan wrinkles.

The transportation funding plan still alive in the General Assembly is the House of Delegates' version of Gov. Bob McDonnell's proposal to dump the current gas tax and replace it by increasing the state sales tax from 5 percent to 5.8 percent, among other plan wrinkles.  .  .  .  the Senate version of McDonnell's plan and several proposed amendments to it were defeated by Democrats who consider its revenue sources either unreliable or sacrosanct.


McDonnell needs to dump the GOP's failed approach on taxes and increase the gasoline tax and make sure all of the new revenues go to highway repair and expansion.