Same Sex Love on the Battlefield 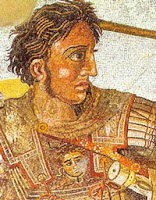 As a history major and one who has read countless books on ancient history, I always find it ridiculous that the opponents of DADT act as if gay service members can't be phenomenal soldiers. I have several friends who were formerly in the special forces units of the military who are anything but the effeminate males the gay bashers like the mostly likely closeted Tony Perkins and Robert Knight so like to whine about. The situation is made even more ironic that among the battles often studied in military schools are those fought and won by Alexander the Great. But Alexander was hardly the only fierce warrior from the distant past - Hadrian is another prime example. And then there's Julius Caesar who reportedly played for both teams. Every time the Christianists rant about gays in the military, they demonstrate their utter ignorance of historic fact. A piece on The Smart Set looks at the REAL story. Here are some highlights:
*
[A]ccording to Paul Cartledge, professor of Classics at Cambridge University, the film [Oliver Stone's movie, Alexander] is actually very coy about Alexander’s busy homoerotic life: There is no real doubt that he took a young Persian eunuch named Bagoas as his lover in Babylon, and that at the height of his power he was still carrying on a torrid affair with his studly childhood sweetheart, Hephestaion. On the other hand, we also know that Alexander sired at least one son — with his wife, the lovely Afghani princess Roxanne — and that he maintained a bevy of voluptuous mistresses as he stormed his way across the Middle East.
*
In ancient times, as we have seen, there were no separate categories for “homosexual,” “bisexual,” or “heterosexual.” All men were expected to marry one woman and have children for the good of society, but this was a dull, business-like arrangement; husbands would not even kiss their wives in public. When they were feeling romantic, they would head to the gymnasiums and fall passionately in love with downy-cheeked boys, emulating the randy gods and heroes of Greek myths. (Even the ultimate he-man Hercules went through dozens of boyfriends and enjoyed a phase as a cross-dresser). “Men were not castigated for sex with other men,” says Cartledge
*
Grown men could have their way with adolescent boys up to the age of 16 or so; it was even part of a Greek boy’s education, as the older lovers would “mentor” them in the finer aspects of art and philosophy, while their fathers looked on with approval. But adults had to keep their hands off other grown men. The question of who was the active and who the passive partner was crucial; the older, socially superior male could give but not receive.
*
SOURCE/FURTHER READING: Aldrich, Robert (ed.), Gay Life and Culture: A World History (New York, 2006); Cartledge, Paul, Alexander the Great, (New York, 2004).
Posted by Michael-in-Norfolk at Sunday, November 14, 2010