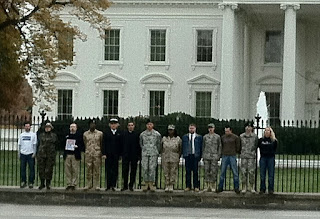 The leaked information on the likely conclusion of the Pentagon's study on repeal of DADT seems to be pressuring some of the non-senile in the U. S. Senate to call for the DOD to release its DADT study results ahead of schedule. No doubt John McSenile will acting as if someone has pissed in his Cheerios at this news. Obviously, if the results are released ahead of schedule (and confirm the leaked claim that 70% of the surveyed service members have no real issue with serving with openly gay troops), the Senate's excuse for not taking up the matter before the end of lame duck session wither away. The letter sent by Senators Lieberman and Collins can be found here. Clearly, their goal seems to be to move a vote on DADT repeal forward. Where's the Liar-in-Chief on this issue? Gates does, after all, report to Obama. Here are highlights from Politico's take on this development:
*
Two influential senators who want repeal of the military’s “don’t ask, don’t tell’ policy have called on the Pentagon to accelerate the release of a report examining the effects of such a sweeping change, and how it can be implemented.
*
On Monday, Senators Joe Lieberman (I-Conn.) and Susan Collins, a Maine Republican, sent a letter to Defense Secretary Robert Gates, urging him to make the highly-anticipated report public “as soon as possible” to improve the chances that a conditional repeal of the ban on gays in the military – currently attached to a must-pass defense authorization bill – will become law before the clock runs out on the lame-duck session next month.
*
Despite doubts that Congress lacks the time – and the political will – to address the issue, “I’m not giving up on us doing a repeal of ‘don’t ask, don’t tell’ during the lame-duck session,” Lieberman said Monday on MSNBC. “To make that possible, I hope that the Defense Department can find a way to issue this report that they’ve got pretty much done, but going through clearance now, as quickly as possible and certainly before December 1st.”
*
In a related development, 13 veterans urging immediate repeal of “don’t ask” were arrested Monday after chaining themselves to the White House fence, according to a Park Police spokesman and a statement from the group that organized the protest, GetEqual. Among them were Army National Guard Lt. Dan Choi and four other pro-repeal military veterans who were arrested in a similar protest in March.
*
NOTE: Among the 13 activists were some fellow LGBT bloggers and Dan Choi who I had the pleasure of speaking with one on one some months back. Some may see chaining yourself to the White House fence as theatrical, but given the spinelessness and disingenuousness of the Liar-in-Chief, these types of things ARE needed to continue embarrassing legislators to act.
Posted by Michael-in-Norfolk at Monday, November 15, 2010