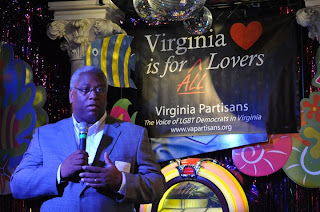 Last year Senator Donald McEachin introduced legislation to protect Virginia state employees from discrimination based on sexual orientation in the workplace. The bill passed the Senate, with every Democrat voting in support of it, but it was defeated in the Republican-controlled House of Delegates. McEachin is not giving up and he will be reintroducing his bill in the upcoming 2011 session. ALL Virginians deserve equal opportunity, fairness and justice and I applaud McEachin's efforts. Would that we had a similar in the White House.
*
In the run up to reintroducing his bill, McEachin is asking Virginia residents to be a citizen sponsor of his non-discrimination legislation, Senate Bill 747. McEachin's goal is to take the voices of thousands of people with him to the General Assembly to legislators and Taliban Bob McDonnell the overwhelming support for this bill.
*
I encourgae Virginia readers to go sign onto Senator McEachin's effort and help send a message that we are tired of Virginia's allowance of religious based bigotry in the work place. You can sign onto the petition here. Join me in doing so. Thank you.
Posted by Michael-in-Norfolk at Monday, November 15, 2010