It's DADT That's Immoral - Not Homosexuality 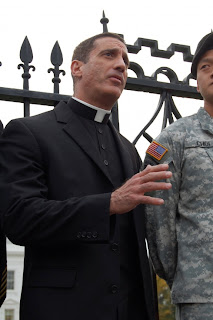 I often complain that gay friendly Christians are too silent while yielding the field to gay-hating modern day Pharisees. In fact, at a wedding I had an interesting conversation with a liberal Baptist minister who understood that we are ALL God's creation whether gay or straight. Recently, at least other two individuals who, in my opinion, are real Christians spoke out for LGBT equality and confirmed our humanity. One was Fr. Jeff Farrow (pictured above) who spoke out against the Roman Catholic Church's support of Proposition 8 and was rewarded by the hate-filled fossils in the Church hierarchy by removal from his parish and suspension as a priest. Yesterday, Farrows was one of the 13 protesters who chained themselves to the White House fence and was arrested as a result of a demonstration urging DADT repeal. I salute Fr. Farrow. Another is Debra W. Haffner, an ordained Unitarian Universalist minister and Executive director of the Religious Institute, a multifaith organization dedicated to sexual health and justice, who has a piece in the Washington Post that condemns the immorality of DADT. Here are some highlights:
*
Despite public and military support for overturning Don't Ask, Don't Tell, the legislation which bans openly gay service members, political, military and religious leaders cite a variety of objections to changing the law.
*
Sen. John McCain (R-AZ) worries that allowing gays to serve openly would impact troop "morale;" Marine Corp Commandant Gen. James Amos says that a policy change may affect "unit cohesion" and "combat effectiveness." Among the religious leaders opposed to overturning Don't Ask, Don't Tell is Catholic Archbishop for the Military Services Timothy J. Broglio, who fears that chaplains would be forced to compromise their principles in accepting "objectively disordered" homosexuality, adding that he "can never condone -even silently -homosexual behavior."
*
What beliefs are behind banning gays in the military? What's the role of religion in this debate?
*
More than a decade of "Don't Ask, Don't Tell" has forced my gay friends to live in the military closet, even as they affirm their sexual orientation in other parts of their lives. My colleagues who are chaplains in the military are forced to compromise their religious principles in counseling young military people to stay in that closet rather than upholding their religious commitment that sexual and gender diversity is part of God's blessing.
*
Those on the right who use four to seven clobber texts in the Bible to buttress their support for "Don't Ask, Don't Tell" violate the overarching messages of the Scriptures. As I wrote on these pages in mid-October, "using the Bible to exclude or condemn people violates the very spirit of our traditions. I choose to uphold those texts that recognize that there are many forms of blessed relationships, that invite us to welcome those who are different, and view all people as created in God's image."
*
More than 3500 religious leaders from more than 50 faith traditions are members of the Religious Institute network, affirming full inclusion of gay, lesbian, bisexual, and transgender persons, and millions of people of faith stand with them. To those who would use religion to deny LGBT people their rights, I say the sin is not homosexuality but homophobia, the denigration of our neighbors because they are physically and emotionally attracted to people of the same sex. The sin is heterosexism, the presumption that heterosexuality is normative for all people and morally superior. The sin is forcing people to deny their God-given gift of their sexuality and to suffer to try to live their lives in a way that is antithetical to who they really are - or to force them to live in silence. The sin is violence and discrimination against women and GLBT persons and denial of their rights.
*
It is time to end "Don't Ask, Don't Tell". The American people think so, the military chiefs of staff think so, and the rank and file service people think so. . . . The military and society will be strengthened when all people are able to live fully and express their gender and their sexuality with holiness and integrity. It's past time for that to happen.
Posted by Michael-in-Norfolk at Tuesday, November 16, 2010

Just let me say this, my husband DID read my blog on DADT and He told me he 100% agreed with my opinion it doesnt matter about your sexual identity but it DOES matter IF you can cover his ass in a Fox Hole during a war, HE respects ALL who wish to serve their country proudly,just as he does, but for the goverment to QUESTION each person's sexual identity is not just immoral but a clear violation of their Civil Rights , now understand this this is MY OPINION and my husband and I usually agree and if he doesnt he will tell me but I am spot on and it isnt about our US Military it is HOWEVER about OUR Washington DC idiots who need to worry about other things NOT this.

Thanks for your input. Knowing that you are a military family and that your husband is on active duty, it's important that people know that the homophobia isn't coming from the troops but rather from the disingenuous and whore-like politicians (of both parties)in Washington, D.C. Please call your members in Congress and say the same thing.

Hey as a Mil wife for 22 years I know, and it is no problem, I have dealt with alot, and to us its about being able to do your job not what your sexual identity is because who cares about what you prefer but can you cover your battle buddy when they need it.....