What We Need to Learn From T.E. Lawrence 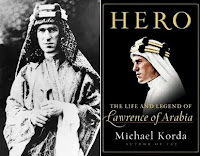 I have noted in frustration many times how the USA's leadership never seems to learn anything from history or from the debacles suffered by others. The Middle East mess is a prime example where history should have made it obvious that Chimperator Bush and Emperor Palpatine Cheney were taking the nation on a fools errand. A new book is out and highlighted on the Daily Beast which looks at the life and experiences and views of the legendary T. E. Lawrence, better known as Lawrence of Arabia, and how much of today's quagmire was created by the western powers - most notably Britain and France - ignoring Lawrence's advice and trying to impose unworkable boundaries creating nation without regard to the indigenous people that should have been factored into the equation. Greed, arrogance and hubris won out and we are still paying the price today while worsening the situation with another generation's arrogance and hubris. Here are some highlights on Michael Korda's new book:
*
T. E. Lawrence was far more than a glamorous, swashbuckling, heroic figure in flowing robes mounted on a camel, leading the Arab tribes against the Turks in World War One. . . . Today, when the Middle East is the main focus of our attention, and when Muslim insurgency, his specialty (and to some degree his invention) is the main weapon of our adversaries, the story of Lawrence’s life is more important than ever.
*
Much of what we face today in the Middle East (and even in Afghanistan) has its roots in Lawrence’s doomed struggle to get the Arabs what he (and they) thought they had been promised and deserved for rising in revolt against the Ottoman Empire, and in the betrayal of their hopes and his at the Paris Peace Conference in 1919. Therein lies the birth of the many grievances and bitterly disputed frontiers that still divide the region fatally, and which in the last 90 years have caused enough bloodshed to stain the sands of the desert red, with no sign that it will stop any time soon. But neither have we turned back to Lawrence to see where the Western world went wrong, or to learn from him how to understand and deal with the roots of Muslim anger at the West, or with the wars of terrorism and insurgency of which Lawrence was to some degree the inventor.
*
Lawrence . . . played a significant role in shaping the modern Middle East, as well as warning where its stress points would be—warnings that were ignored at the time, and, worse, are still being ignored today.
*
It is not therefore surprising that one of Osama bin Laden’s chief complaints against the West—one which often mystifies Westerners—is “the Sykes-Picot Agreement,” the 1916 secret treaty between Britain and France (and Imperial Russia before it collapsed) to divide up the Arab lands of the Middle East between them once the Ottoman Empire was defeated.
*
On this subject, at least, Osama bin Laden and T. E. Lawrence would have stood as one. Lawrence fought against the Sykes-Picot Agreement, attempted to undermine it, drove the Arabs on in a desperate race to capture Damascus and declare an independent Arab state before the British Army could get there, argued against the Sykes-Picot Agreement vehemently with Wilson, Lloyd George, and Clemenceau after the war in Paris at the peace conference, as well as face to face with King George V at Buckingham Palace . . .
*
It is not necessary to agree with the Arab point of view about their own history, but it is foolish to ignore it. In the eyes of Arabs, the West (including the United States, which acquiesced to the brutal and cynical British and French partition of the Middle East) is responsible for the fragmented reality of the area today, and for its artificial frontiers. This is the unforgivable “original sin” to Arabs, and the subsequent partition of Palestine is merely a further extension of it, exacerbating wounds that were already there.
*
Many of the problems that exist in the area—including, but by no means limited to Syrian-armed interference in Lebanon, the failure to create a viable “Kurdistan” for the Kurd people, the hostility between Arabs and Jews in Palestine, the future of the West Bank—were addressed by Lawrence in the map he prepared for the British War Cabinet and the Paris Peace Conference, but brushed under the table by the great powers.
*
Had Wilson, Clemenceau, and Lloyd George been willing to agree to Arab demands, an Arab-Jewish state might have existed that could have absorbed the bulk of the European Jews whom the Germans would slaughter between 1933 and 1945, as well as producing a state with advanced agriculture, industry, and education, in which Jews and Arabs might have proved that they could live together peacefully and productively.
*
Nobody understood better than Lawrence how a small, highly mobile group of insurgents could immobilize, exhaust, and eventually defeat a much larger and better equipped modern army by an endless series of “pinpricks,” small raids in which high explosives—the equivalent of today’s IED, or “improvised explosive device” in Iraq and Afghanistan—were used to destroy key objectives, bridges, roads, railway lines, water towers, and telegraph posts, keeping the larger force constantly on the alert, never knowing where the next strike would occur, and tying up thousands of enemy soldiers in useless guard duties.
*
Bombing people will seldom change their mind, and certainly not about their own government, whether done by the Turks against the Arabs in 1918, or by the British against the Iraqis in the 1920s, or with drones in Afghanistan today.
Posted by Michael-in-Norfolk at Monday, November 15, 2010