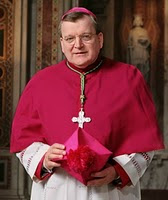 Apparently not wanting to be out done by evangelical and fundamentalist Christians - using the term Christian loosely, of course - the Roman Catholic Church is piling on as well with anti-gay demagoguery with Cardinal Designate Raymond Burke (pictured at right) disseminating DVD's lecturing Catholics that it is a sin to vote for candidates who, among other things, support civil marriage equality for LGBT Americans. Besides representing the height of hypocrisy on the part of an institution that has time and time again protected child rapists, Burke's conduct raises a serious question as to how and why the Catholic Church has retained tax-exempt status given its huge involvement in election politicians and furthering religious based discriminatory legislation. Meanwhile, of course, Burke has done nothing to remove those who enabled and covered up for child rapists from the Church hierarchy. Christian News Wire has these highlights from Burke's disingenuous bullshit:
*
As Americans approach the eve of election week, U.S. Cardinal-designate Raymond Burke is reminding Catholics in an exclusive 25-minute video interview that they are bound in conscience to vote for political candidates who oppose aborting babies, embryonic stem cell experiments, euthanasia and so-called homosexual "marriage."
*
"Millions of Catholics have no idea it's a sin to vote for candidates who favor these grave evils, which attack the very foundations of society, . . . "
*
"So, the Catholic Church in teaching that sexual acts between persons of the same sex are intrinsically evil, are against nature itself, is simply announcing the truth, helping people to discriminate right from wrong in terms of their own activities."
*
Like so many others, I suspect that (1) Burke has the blood of LGBT suicide victims on his hands, (2) is part of the sexual abuse cover up machine directed from the Vatican and (3) has a reserved place in Hell.
Posted by Michael-in-Norfolk at Wednesday, October 27, 2010