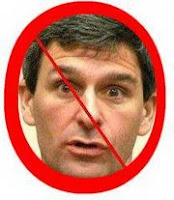 I cannot help but ask myself WTF is wrong with the Virginian Pilot which has published a propaganda piece on Ken Cuccinelli that for the most part reads as if it had been authored by The Family Foundation, the toxic Virginia affiliate of Focus on the Family and Family Research Council. Cuccinelli embodies the religious extremism and religious based bigotry that the Founding Fathers sought to prevent - e.g., Virginia's Statute for Religious Freedom which is still part of the Code of Virginia although utterly ignored by today's GOP zealots. Despite this reality, the Pilot gives Cuccinelli the equivalent of fellatio in its gushing description of a Christofascist and opportunist who cares nothing for the rights of most citizens or how backwards and bigoted he makes the Commonwealth appear to those in other states and counties. Equally upsetting, the Pilot raises the issue of Cuccinelli - who is equally insane as Sarah Palin - as a presidential candidate in 2012. Again, WTF is wrong with the Virginian Pilot? Here's a tiny sampling of the batshitery:
*
Conservative Wall Street Journal columnist Stephen Moore was delivering a luncheon address to a group of like-minded New Jersey voters in August when something unexpected happened. Moore asked audience members to name their preferred presidential candidate in 2012. Several offered Ken Cuccinelli's name.
*
To Hampton Roads Tea Party founder Karen Miner Hurd, Cuccinelli is refreshing precisely because he isn't a typical politician and his brand of no-nonsense pragmatism doesn't neatly "fit into the paradigm of conservatives."
*
A New Jersey native raised Roman Catholic, Cuccinelli has called Northern Virginia home since he was a child. He still lives there with his wife, Teiro, and seven children. After the 2009 election, the family moved from Fairfax County to Prince William County rather than Richmond, where his job is based, so their eldest daughter wouldn't have to leave her Catholic school. His younger children are home-schooled.
*
[H]is supporters believ[e] Cuccinelli is destined for higher office. "Ken Cuccinelli... is on the front lines, and people know if this guy is in the White House, he'd be undoing the Obama agenda so fast, people's head would spin," gushed Rick Shaftan, a political consultant who has worked on past Cuccinelli races.
*
Cuccinelli rejects the "maverick" label, but it's clear his agenda isn't always in lockstep with Gov. Bob McDonnell or the governor's heir apparent, Lt. Gov. Bill Bolling, both fellow Republicans.
*
That was evident weeks after taking office, when Cuccinelli gave legal advice to colleges and universities that they lack the authority to include sexual orientation in non-discrimination policies. Cuccinelli defends that guidance as a reminder to those schools "that their powers are limited" by the state constitution and code and "no matter how well-intentioned their efforts, they may not exceed those limits."
*
"I'm a target, so I've got to act like one," Cuccinelli told The Washington Post. "Which just means work hard. Don't wait for the election." "He's going places. He's either going to be president or on the Supreme Court in 10 years. One or the other," predicted Shaftan, the political consultant. "I think the left is very afraid of him, as they should be."
*
Done vomiting yet?
Posted by Michael-in-Norfolk at Sunday, October 24, 2010