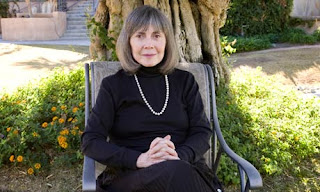 Earlier in the year Anne Rice, author of the Vampire Chronicles, made a media splash when she publicly stated that she was leaving the Roman Catholic Church and Christianity because of the homophobia and other forms of hatred and discrimination that seem to be the principal hallmarks of the faith. In an interview with the Guardian, Rice elaborates on her thoughts and why she felt morally compelled to split with the religion in which she was raised. I very much agree with Rice and despite the efforts of and speaking out by some strong Christian allies to the LGBT community and the more gay-accepting stances of denominations such as the ELCA, I largely view Christianity and the Roman Catholic Church as malevolent forces in the world. Here are highlights from the Guardian interview:
*
Her recent, angry split with the Catholic church made as much news as her sales figures . . . Earlier this year, Rice, who was raised a Catholic, lost her faith and returned to it in middle age, posted a message on Facebook. "I quit," she wrote. "In the name of Christ, I refuse to be anti-gay. I refuse to be anti-feminist. I refuse to be anti-artificial birth control. I refuse to be anti-Democrat. I refuse to be anti-secular humanism. I refuse to be anti-science. I refuse to be anti-life. In the name of Christ, I quit Christianity and being Christian.
*
For years, she thought, if she studied the Bible hard enough she might work out the contradictions. "But then, as I increasingly saw what I thought was sophistry and lies, I thought: 'I can't abide this.' I can't remain with this. This is crazy. There is no basis in scripture for any anointed hierarchy, let alone a male hierarchy. It's just not there. And how in the world did this man-god die, preaching against the temple, and then we wind up with St Peter's in Rome? How did that happen? There were so many issues where I thought the church was flat-out immoral. I had to leave."
*
Looking back, she sees her vampires as metaphors for outsiders to the faith, although she was an atheist when she wrote them. "I only saw that as I went on – how fascinated I was by outsiders.
*
I've always had gay characters in my books with no effort or plan. They just happen. Characters fall in love with people of their own gender or the opposite. Very early on I was surprised to discover that I had a large gay audience, and a faithful gay audience. They kept my books alive in the beginning when they might have gone under."
Posted by Michael-in-Norfolk at Sunday, October 24, 2010