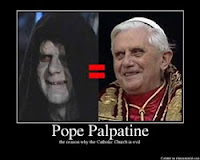 There is an interesting article in Commonweal Magazine that looks at a silent crisis in the Roman Catholic Church in America that the U. S. bishops and the Vatican seem to be deliberately ignoring. What is it? The huge numbers of people leaving the Catholic Church. Indeed, the anti-gay, pro-discrimination stances of the corrupt, bitter old men in Rome and cathedrals around the USA seem to be fueling the defections. Personally, I see the huge number of people leaving the Church to be a positive since only falling membership numbers - and more importantly, declining revenues, are the only things that matter to the Vatican and the Nazi Pope. Eventually, the Church will have to change or effectively withdraw for the modern world and become a third world religion as educated populations give up on the Church and its 12th century mind set. Here are some story highlights:
*
[T]he Pew Forum on Religion and Public Life’s U.S. Religious Landscape Survey, based on interviews with a representative sample of thirty-five thousand adult Americans, reported that one out of every three adult Americans who were raised Catholic have left the church. If these ex-Catholics were to form a single church, they would constitute the second largest church in the nation.
*
Thomas Reese, SJ, the former editor of America, recently described this loss of one-third of those raised Catholic as “a disaster.” He added, “You wonder if the bishops have noticed.” I wonder too. As far as I know, there has never been any systematic discussion of these findings at the meetings of the United States Conference of Catholic Bishops. They will meet again in mid-November, with an agenda that will deal with many things—but not with these devastating losses.
*
Last summer, for example, conservative Catholic New York Times columnist Ross Douthat wrote in the Atlantic that “for millions in Europe and America,” Catholicism is “finished”—“permanently associated with sexual scandal, rather than the gospel of Jesus Christ.” The word “finished” evidently struck a nerve. Many commentators on blogs, apart from the predictably querulous or bitter, poignantly described how for themselves or family members a once-strong Catholic faith was reaching some point of no return.
*
According to the Pew survey, about half of that one-third leaving the church enter the ranks of the fastest-growing religious group in the nation, the “nones,” people who tell pollsters they have no particular religious affiliation . . . Catholics becoming unaffiliated stressed disagreement with church teachings, both general teachings and church positions on specific issues like abortion, homosexuality, and treatment of women, and to a lesser extent clerical celibacy. In open-ended questioning, they also stressed hypocrisy and other moral and spiritual failures of church leaders and fellow Catholics.
*
“Catholicism,” the Pew study found, “has lost more people to other religions or to no religion at all than any other single religious group.”
*
I suspect that the trend will continue, if not accelerate, as the Church hierarchy becomes more and more reactionary and as a result less and less relevant in a modern world where science and objective fact undercut a warped theology.
Posted by Michael-in-Norfolk at Monday, October 25, 2010