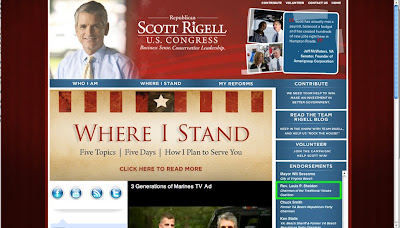 UPDATED: A version of this post will publish on The Bilerico Project later today and Blue Virginia has picked up the story and expanded it - Lowell's expanded piece is a must read. The story is important because Rigell has gone to great lengths to depict himself as a "business man" and to keep his extreme position on social issues under the radar. I'm not sure why Glenn Nye hasn't made Rigell's extremism more of an issue - perhaps fear of being labeled "anti-Christian" in a conservative district. In reality, Rigell is cut out of the same cloth as Christine O'Donnell and Sharon Angle. The issue of this endorsement is also important because to be registered by the Southern Poverty Law Center as a hate group really requires that an organization demonstrate extreme toxicity and hate. Among other hate groups it tracks are the Klu Klux Klan, Neo-Nazi groups and white supremacist groups.
*
Imagine my surprise at finding Lou Sheldon, head of the Traditional Values Coalition ("TVC") proudly listed as an endorser of Scott Rigell, the GOP candidate for Virginia's 2nd Congressional District. After all, the Southern Poverty Law Center has registered TVC as an anti-gay hate group. One would think that even a far right Christianist like Rigell might want to avoid appearing to be a fanatic. But apparently such is not the case. The Southern Poverty Law Center has this, among other things to say about registered anti-gay hate groups:

Many of its leaders have engaged in the crudest type of name-calling, describing homosexuals as "perverts" with "filthy habits" who seek to snatch the children of straight parents and "convert" them to gay sex. They have disseminated disparaging "facts" about gays that are simply untrue — assertions that are remarkably reminiscent of the way white intellectuals and scientists once wrote about the "bestial" black man and his supposedly threatening sexuality.

My discovery of Sheldon's endorsement of Rigell actually came about quite innocently. This evening the portion of Hampton, Virginia, in which I live held a very well run candidate forum for the three candidates running for the Virginia 2nd congressional district. Democrat incumbent Glenn Nye and independent candidate Kenny Golden both appeared and cogently responded to a uniform slate of questions. And Republican Scott Rigell? He was "too busy." The multi-millionaire Rigell (who made $400,000 off the "cash for clunkers" program even though he condemns Glenn Nye for voting for the stimulus bill) blew off the forum to attend a fundraiser somewhere on the south side of Hampton Roads
*
Rigell's absence and the incoherent presentation by Rigell's surrogate, failed GOP primary candidate Bert Mizusawa, left me with no option but to revisit Rigell's campaign web site to determine what if anything Rigell had to say on the issues addressed at the forum. I had not been to the website since it was recently sanitized to remove the names of a past and recently resigned GOP party chairs for Virginia Beach linked to racist e-mails after coverage hit the Virginian Pilot and many other media and blogosphere outlets.
*
So besides holding endorsements from accused racists and the head of a registered hate group what else did I learn about Rigell from his web site? Actually, not much and it's hard to discern what Rigell believes in other than (1) a reprise of Ronald Reagan's trickle down economics that created a huge budget deficit, and (2) "protecting marriage," from the gays, and (3) likely maintaining special rights for far right Christians whose rights will trump those of other citizens.
*
It should be noted that Lou Sheldon of TVC is not the only Christianist fanatic endorsing Rigell. Others include home schooler icon and Patrick Henry College founder Mike Farris and Bishop E.W. Jackson Sr., President of STAND AMERICA. While his name isn't visible on Rigell's website, Pat Robertson is no doubt also lurking behind the scenes as well.
*
Golden is in many ways a moderate compared to Rigell, but the only candidate that will protect the rights of all citizens is Glenn Nye. Glenn will get my vote on November 2, 2010. Meanwhile, Rigell needs to be called out on boasting about support from individuals like Sheldon and organizations like TVC.
Posted by Michael-in-Norfolk at Tuesday, October 26, 2010