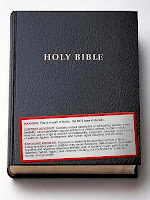 A number of the Christian Right organizations have come together and underscored just how ugly and hateful Christianity has become under their foul influence. Indeed, these organizations seem driven to deliver a message that will fuel more gay teen suicides even as they lie and claim that "gay" suicides are a "myth." It doesn't get much more than despicable than this, but its the norm for Christianists. The roster of hate merchants endorsing the anti-gay declaration include American Family Association, Citizens for Community Values, Liberty Counsel, Americans for Truth, American Family Association of Michigan, American Family Association of Pennsylvania, American Family Association of Indiana, and RenewAmerica. Each of these organizations engages in vicious anti-gay propaganda and, of course, in the process, enriches its leaders financially. As I have said before, the nastiest prostitute is down right virtuous compared to the individuals and organizations. Christian News Wire reports on the lies and disinformation being disseminated by these groups. Here's a sampling:
*
A coalition of pro-family leaders today urges Christian families to be faithful to biblical morality and discerning in the face of false and irresponsible accusations. Christianity and traditional values are not the cause of teen suicides, and attempts to link the two are deceptive and will ultimately harm children.
*
"Gay" activists nationwide are fueling an effort to indict traditional moral values as "guilty until proven innocent" in some bullying incidents involving teens. Their proposed solutions end up sexualizing teens at young ages into known high-risk behaviors and silencing concerned parents.
*
"Just say no" to these outrageous and unsubstantiated claims, said Buddy Smith, Executive Vice President, American Family Association (www.afa.net). "Bullying can be prevented without endorsing homosexual behavior.
*
Authentic Christians will remember several key concepts from Scripture:
*
1. Homosexual behavior is always a sin, God's plan for sexuality is male/female marriage, and God has not changed His mind about this (Genesis 19; Leviticus 18:22; Matthew 19:4-6; Romans 1:24-27; 1 Corinthians 6:9-11)
*
4. School boards aid child corruption and insult faithful families when they allow "gay-straight alliances," homosexual indoctrination programs, permission for use of opposite sex restrooms, and any of the other ridiculous demands of the "gay" lobby.
*
"It's time that extremists stop exploiting tragedy to push a selfish political agenda," said J. Matt Barber, Director of Cultural Affairs of Liberty Counsel (www.lc.org). "Liberal pressure groups have been shameless. They use talk of 'bullying' as a Trojan Horse to silence traditional values.
*
Concurrently, Matt Barber of Liberty Counsel - a toxic blight on society based in Lynchburg, Virginia, - has takes the hatred a step further and made the disingenuous claim that the problem of gay teen suicide is a myth. That's right. The recent deaths of gay teens to suicide is some fabricated myth. It's beyond disgusting, but increasingly represents the face of Christianity in the USA. Here are highlights from OneNewsNow:
*
A conservative attorney . . . . believes the idea that there is a homosexual youth suicide epidemic is a dangerous misconception.
*
Studies show suicidal tendencies among homosexuals are about ten percent higher than the rest of society, but that occurs even in European nations where homosexual activity is celebrated and in areas of the United States where the lifestyle is more accepted. So since so-called "homophobia" is not the cause, Barber suggests another possibility.
*
"I think the cause is clearly we need to look to these kids who are sexually confused and are really disturbed and tormented internally -- it's not an external source," he notes. "So often times, unfortunately, with no other perceived means at hand, some of these kids are at risk to hurt themselves."
*
He believes God's natural order is written on the hearts of every man and woman, which means people know when they are violating natural order. The Liberty Counsel attorney decides that young people struggling with homosexuality are in need of counseling for their gender identity disorder.
Posted by Michael-in-Norfolk at Wednesday, October 27, 2010