Will Gays Get Scapgoated for Democrat Losses? 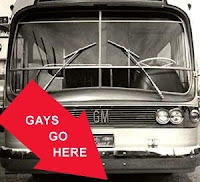 The AP story carried by the Washington Post and many, many other news outlets that I addressed over the weekend has ignited a huge fight across the blogosphere between those who I would describe as the "professional gays" - i.e., those aligned with HRC, NGLTF, Stonewall Democrats, etc., who (a) make their livelihood off of what they call activism, (b) often appear to be Democrat cheer leaders, and (c) who claim to represent the LGBT community Nationwide - and the "blogger/grassroots gays" - i.e., those who hold down full time jobs and engage in activism not because it's a job but because (a) they are tired of third class citizenship and (b) they want change for the better, preferably sooner as opposed to later.
*
The professional gay set - which I often view as water carriers for the Democrats - seems incensed that (1) LGBT voters are in many cases very angry with the Democrats (and in many cases, Gay, Inc., itself), and (2) are in some cases seriously considering either not voting or casting their vote for third party candidates. In addition, they insist that one MUST get out and vote for Democrats - basically no matter what and no matter how unhappy you might be with the Liar-in-Chief and the spineless Congressional Democrats. Applying the reasoning of many of the professional gays who use the GOP bogey man just as readily as the DNC, I see the situation as akin to having to decide to vote for either a murderer or a child molester. By the professional gay reasoning, since a child molester isn't as bad as a murderer, one MUST vote for the child molester.
*
As I have said before, I hold no love for the GOP and the down right frightening Tea Party crowd. That said, we cannot let the Democrats try to lay blame on LGBT voters (and other constituencies) should the Democrats get decimated on November 2nd. They have created their own problems through lies, timidity, broken campaign promises, and double dealing. Should things go badly on November 2nd, they need look no farther than the nearest mirror to see the parties who are truly responsible - AND to the White House where the Liar-in-Chief bears huge responsibility for the apathy of many gay, Hispanic and other voting blocks.
*
So where do we go after November 2nd? Zack Ford at Pam's House Blend has a suggestion that in my view has merit. Here it is:
*
But after next week? I think we really need to reevaluate LGBT politics and the risks we're willing to take. We need to stop silencing every opinion that goes against the grain of the movement (as many will undoubtedly try to do with THIS opinion).
*
We need to consider whether being a lapdog to the Democratic party is getting us anywhere. Do we really need to back a horse in every race? Do we need to spend all of our money in every election cycle? Do we always support incumbents even if they haven't taken action on our behalf? Does our movement have any real political sway, or are we just a fundraising/vote-rallying arm of the Democratic party? Do we ever support the candidate that actually most supports us, even if as a third-party candidate or primary challenger they aren't as viable? Are we really content with a paranoid "at least they're not persecuting us" limbo?
*
If the movement's movers and shakers are unwilling to change anything, then I want a new movement. What's "good enough" for some doesn't seem to be very good at all.
Posted by Michael-in-Norfolk at Monday, October 25, 2010