A Letter By the Sister of Lt. Col. Victor Fehrenbach 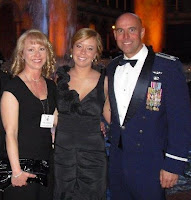 Each day this week, Service Members Legal Defense Fund ("SLDN") and bloggers who participated in the "Letters to president Obama" campaign earlier this year such as this blog are publishing a letter from a family member of a service member adversely impacted by DADT in the lead up to the U. S. Senate's consideration of a bill that would potentially begin the process of repealing DADT. DADT serves absolutely no legitimate purpose other than to enshrine religious based discrimination into the law - something that should be abhorrent to all true Americans who support the Constitution. Today's letter is written by Angela Trumbauer, the sister of Lt. Col. Victor Fehrenbach whom the Air Force is seeking to discharge under DADT despite has amazing career and record. Here is the letter:
*
August 27, 2010
*
Hon. Jeh C. Johnson
General Counsel, U.S. Department of Defense
Co-Chair, Comprehensive Review Working Group
*
General Carter F. Ham
Commanding General, U.S. Army Europe
Co-Chair, Comprehensive Review Working Group
*
Dear Mr. Johnson and General Ham:
*
My name is Angela Trumbauer. I am an Air Force enlisted veteran. I was born and raised in a family of 8 children by my father, a retired Air Force officer (deceased 1979), and my widowed mother, a former Air Force officer, who just turned 78 years young this month. I am married to a retired Air Force Senior Master Sergeant. My stepson is an active-duty Air Force Technical Sergeant. My brother is Lt. Col. Victor Fehrenbach, a highly decorated 19-year Air Force officer. I hail from the “military family” in every sense.
*
Over Victor’s military career, our family had limited opportunities to see and spend time with him. He came home to Ohio for visits once or twice a year, usually over the Thanksgiving or Christmas holidays. I took my kids to visit him at his assigned Air Force Bases a few times over the years. We prepared and sent him care packages when he was deployed to Iraq. Vic sent me care packages when I was stationed in Greece years ago, while he was still a high school student. Reflecting back, I never gave much thought to his short 2-3 day trips home or the seemingly strained nature of the visits. All that changed in May, 2009, however, when my brother was forced to reach out and seek our family’s support in the most difficult battle of his life – fighting against his discharge under “Don’t Ask Don’t Tell.”
*
The revelations that have come to light and emotions evoked throughout the past year have brought a great sense of loss and heartache to our family, not unlike that experienced in grief and death. It saddened me deeply to realize that my single, younger brother could never enjoy a close personal relationship, free from fear of persecution or harassment, throughout his near 20 years serving. His family back home was free to enjoy wonderful family relationships with their spouses and children, but Vic was never to experience that same freedom and privilege while in uniform. I often wonder how alone or lonely he must have felt all those years, especially when he couldn’t even share his personal struggles with his very own family.
*
I recently took the opportunity to ask my brother who he would like us to notify in the event of an emergency or upon his death, after I realized he had no one else to confide in. Most soldiers and airmen have a support system in place, where their spouses or immediate family members are aware of their dying wishes and will share urgent news or handle the appropriate notifications with those closest to their loved one. In my brother’s case, I just figured the military would let us know if something happened to him and that no one else aside from his family members needed to be notified, since he was single and has no children.
*
Under “Don’t Ask Don’t Tell,” the Fehrenbach family has been robbed of truly knowing and loving our brother for who he is for nearly two decades. He chose to serve in silence to protect his own family – the only family he can legally call his own – from potential exposure to investigation under DADT. We can never get those years back. Nor can we accept the damage to and destruction of our family’s long-standing military history that will result from Lt. Col. Fehrenbach’s discharge under this discriminatory and unjust law. Our family legacy goes back generations, in which our father, mother, grandfathers, spouses, children, uncles and cousins have all answered the call to serve.
*
Despite all the suffering that Don’t Ask Don’t Tell has caused my brother and our family, we have reaped a benefit far greater than words can measure. Since I’ve come to know and understand my brother’s true identity, and because he no longer has to hide any part of himself from me, our relationship has become much closer and deeper, where we laugh and share more than ever before. Vic can now be completely open and honest with me – an element that was clearly missing in our lives and relationship in the past. I can’t express the immense pleasure I’ve experienced in getting to know my baby brother --- “Uncle Baldy” as some of our 17 nieces and nephews call him.
*
In light of the infinite family gains that the repeal of “Don’t Ask Don’t Tell” will yield, I sincerely believe that allowing open service is necessary, right, and just in every sense. Each and every service member deserves the FULL love and support of their family and friends, without fear of persecution, discrimination and harassment. A strong sense of support and love is essential for our troops at all times. It only stands to reason that overall military performance is enhanced and the resolve to accomplish the mission is strengthened by complete and unhindered family bonds.
*
Sincerely,
*
Angela Trumbauer
Posted by Michael-in-Norfolk at Friday, August 27, 2010