A Republican Comes Out of the Closet 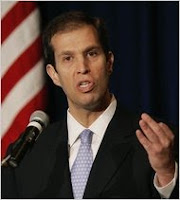 There have been all kinds of reactions to Ken Mehlman ending the open secret that he's one of us. Mike Rogers and a number of other folks were onto Mehlman six years ago or more - back when Melhman was working hand in glove with Karl Rove and deliberately using anti-gay hysteria and anti-gay state constitutional initiatives to turn out Christianists and homophobes to re-elect Chimperator Bush so that the nation could endure four more years of his disastrous mis-rule. While the GOP candidates and talking heads try strenuously to change the subject or blame the economy on the Democrats, the truth is that it was the eight year of Bush/GOP rule that set the stage for the economic meltdown that is continuing to harm so many. Mehlman bears responsibility for that in addition to the harm he has done to LGBT Americans. On a personal level, Mehlman harmed me and LGBT other Virginians because it was in the second wave of anti-gay constitutional amendments that Virginia passed its own draconian anti-gay amendment. But for the successful anti-gay ploy in 2004, it's conceivable that Virginia might not have moved forward - actually backwards - with its own attack of gay relationships. I for one do not believe that Mehlman should get away with a mere "I'm sorry." He aided and abetted real harm to countless LGBT Americans and any redemption will need to carry an equally high price. Here's an idea for starters: Obviously, Mehlman likely knows where a lot of bodies are buried amongst the anti-gay set in the GOP and a good first step would a "come to Jesus" moment with them where they either cease and desist their anti-gay agenda or have their secrets splashed across the media. Frankly, I doubt Mehlman will do any such thing - he's still too addicted to money and power. Money and power are the reason he betrayed so many to start with and inside or outside the closet, Mehlman isn't going to change. The New York Times has a column that looks at reactions to Mehlman's coming out. Here are some highlights of views that I share:
*
[H]e [Mehlman] tells Ambinder: “he wants to become an advocate for gay marriage and anticipated that questions would arise about his participation in a late-September fundraiser for the American Foundation for Equal Rights (AFER), the group that supported the legal challenge to California’s ballot initiative against gay marriage, Proposition 8.”
*
Unsurprisingly, for many gay and liberal bloggers, that’s far too little far too late. “While it’s nice that Ken has finally come out of the closet as an advocate, it’s really hard to forgive him for the damage he did to the community by working actively against it for pay for years,” writes Pam Spaulding of Pam’s House Blend. “That he can coast on the gains for our community by supporting AFER’s stellar work on Prop 8 on the backs of many during his tenure at the RNC who bore the brunt of homophobia, those who died as a result of hate crimes, the activists who were assailed professionally is unbelievable.
*
No pity at all from Joe. My. God.: During Ken Mehlman’s reign as Dubya’s campaign manager and afterwards during his tenure as chairman of the Republican National Committee, 21 states passed laws that banned same-sex marriage. Some of these laws made same-sex marriage unconstitutional, some made both civil unions and same-sex marriages unconstitutional. All of these anti-gay referenda took place from 2004-2006 and all of them were pushed by the GOP under Ken Mehlman (and with Karl Rove’s strategic advice) as a ploy to ensure conservative turnout at the polls. If you live in any of the 21 states listed below, you can credit your second class citizenship, in part, to fellow homosexual Ken Mehlman. Are you feeling very forgiving right now? ARE YOU?
*
FireDogLake thinks Mehlman will never be able to wash the blood off of his hands: In spite of the terror his philosophies inflicted on LGBT citizens and in spite of the decades long scare-fest of anti-gay hatred, gay-baiting and discriminatory laws foisted on us, Ken Mehlman wants us to know that his coming out experience has been just peachy. No apology for all the suicides his party’s stances inevitably brought on. No apology for hate crimes. No apology for the election campaign involving some of the worst anti-gay hatred anyone has ever witnessed. No apology for the terror LGB military people have had to endure. No apology for the forced rapes female soldiers went through to “prove” they are straight. He just wants us to know that he’s been through a whole, whole lot and that he’s a very happy and well-adjusted person.
*
I was in the closet for many years. I was even a Republican for many years. The difference is I left the GOP when the Christianists began to seriously take over the party and when the first hint of the coming anti-gay jihad showed itself. Mehlman could have done likewise. He chose not to do so and needs to bear the consequences. Mehlman wants us to be "understanding" even if we cannot forgive him. Personally, I doubt it will be easily forthcoming. The ball really is in Mehlman's court. If he wants forgiveness and understanding, he needs to do something huge - sponsoring a $5,000 per plate fundraiser just doesn't cut it. I for one will not be holding my breath waiting for Mehlman's redemption. He might surprise me, but he strikes me as still too willing to sell his soul for money, power and influence.
Posted by Michael-in-Norfolk at Saturday, August 28, 2010