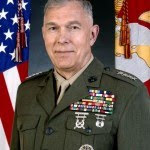 With the Pentagon supposedly investigation unlawful Christianist proselytizing activities by the commanding general of Fort Eustis and Fort Lee here in Virginia, the soon to be former Marine Commandant, James T. Conway (at right), has shot off his mouth and made it clear that religious based discrimination is alive and well in the U.S. Marine Corps. It outrages me that men sworn to uphold the U.S. Constitution - which last time I looked guaranteed religious freedom for ALL Americans, not just Christianists - get away with actively subverting that same Constitution and endeavoring to impose their personal religious beliefs on all. This situation needs to stop NOW - and these individuals need to be discharged from the military. LezGetReal has a story on Conway stating that if gays are allowed to serve in the U.S. Military, they need to be segregated from other servicemembers. Such a move would affirm the religious based discrimination of bigots like Conway himself. Our spineless Commander in Chief ought to be chewing out Conway for these remarks, but we all know that will never happen. Here are some story highlights:
*
Soon to be former Marine Commandant James T. Conway has expressed his desire, once again, to allow for segregation between straight Marines and lesbian and gay Marines. This form of segregation is something that has been off the table since July, when it was made absolutely clear that the only thing that the Pentagon might consider is installing shower curtains in communal bathrooms.
*
According to Conway, he would want to make such arrangements voluntary in order to accommodate the moral and religious concerns of his soldiers. He stated that many Marines are incredibly religious and because of that they would not want to room with lesbians or gays. One is left wondering if he is saying this of himself because his homophobia is rather rampant.
*
Conway has bitterly opposed the repeal of Don’t Ask, Don’t Tell from the beginning. Here is the audio clip of him being interviewed about this particular view:
Posted by Michael-in-Norfolk at Wednesday, August 25, 2010