Bullshit from Would Be California Governor Whitman 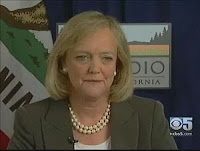 Following up on the previous post's look at Republican lying, GOP candidate of governor of California Meg Whitman, in an obvious move to pander to the most hateful elements of the GOP base, has told the Sacramento Bee that she would appeal the decision in Perry v. Schwarzenegger if she is elected governor. First, of course, she needs to be elected and second, by the time she's in office, if even elected, it could well be too late for the state to appeal since the matter is already at the 9th Circuit and the state of California has not appealed the lower District Court ruling. The federal rules of procedure are very clear in terms of deadline's for appeal and similar matters. If a party fails to meet the deadline for appeal, that party's right to attempt to appeal at a later stage of the case is in all likelihood dead. Add to that the fact that neither Governor Schwarzenegger nor Attorney General Jerry Brown opposed the plaintiffs' case at the District Court level, and any attempt by Whitman to appeal would seem a waste of time and money. Here are highlights on the Courage Campaign's response to Whitman's shameless pandering:
*
The liberal advocacy group Courage Campaign played down Republican gubernatorial candidate Meg Whitman's announcement yesterday that she would defend Proposition 8, which prohibits same-sex marriage, if elected governor.
*
Courage Campaign director Rick Jacobs noted that the 9th U.S. Circuit Court of Appeals has already scheduled a hearing for the week of Dec. 6 to determine whether the initiative's sponsor, the advocacy group Protect Marriage, has legal standing to defend the voter-passed measure.
*
UC Hastings College of the Law professor Rory Little said Whitman's ability to defend the proposition would hinge on several factors - the biggest of which, of course, is whether she becomes governor. It would also depend on whether the 9th Circuit decides the standing issue before January 6 and how the court decides.
*
Again, I find it difficult to believe that a party can fail to appeal and then somehow try to appeal at a later date after the deadline has passed. Filing a notice of appeal even a single day late is fatal to one's case. Even I as a non-litigator know this. Thus, I don't see how Whitman could get involved in the 9th Circuit case much less appeal to the U.S. Supreme Court if the 9th Circuit affirms Judge Walker's lower court ruling. I suspect that Whitman knows this too (if she doesn't, she ought not to be running for governor), but is only too willing to say whatever she thinks the wingnuts in the party base want to hear.
Posted by Michael-in-Norfolk at Sunday, August 22, 2010