An Evening at Stove and Some Positive Things About Virginia

Many of my posts are not very flattering towards the Commonwealth of Virginia - and appropriately so. The laws in this state are backwards and are too beholden to religious based bigotry stoked by far too many Baptists and evangelical Christians who insist that the laws reflect their intolerant religious views to the detriment of all others. Their mindset is really not too far removed from that of the Taliban. Sadly, the Republicans who continue to control the House of Delegates are only too happy to pander to these folks who happily work to subvert the constitutional rights of other citizens. Also lurking behind this theocratic mindset is a simmering racism. Most of the professional Christian groups in the Commonwealth - e.g., The Family Foundation, Daddy Dobson's toxic Virginia affiliate, Liberty University and numerous ultra-far right organizations in Northern Virginia - all tend to be either 100% lily white or far, far less diverse racially than the state as a whole. Candidly, these organizations are out to give white conservative Christians special rights even though they claim those that they hate - gays, Hispanics, immigrants in general, and anyone they deem "other" - are the ones who want special privileges.
*
Despite this malignant aspect, there are positives in the state. The public universities such as UVA help power a liberal and educated perspective (unlike Regent University, Liberty University and bible colleges scattered around the state that seem to long to bring back the Middle Ages) and the larger cities seem to be slowly coming to grasp the need for diversity if they are going to be competitive on the larger economic stage. Similarly, the more educated elements in society - other than opportunistic politicans and those parasites who make a living marketing hate such as the folks at The Family Foundation - like those on our street really do not seem to have any hang ups with gay citizens. We make for good neighbors and help property values if nothing else.
*
And on a personal level, the boyfriend and I are blessed to have a wonderful circle of friends both in Hampton and in the larger Hampton Roads area. These people are part of our larger family, if you will. Last night some of us when out to an amazing restaurant in Portsmouth, Virginia, called "Stove" (pictured above) and had a superb dinner to celebrate the birthday of one of our friends. The food and atmosphere rivals that of top restaurants anywhere and should be checked out by local readers. Sidney Meirs, the owner/chef, is a long time restaurateur who has a devoted following. But Stove is not unique in terms of quality of food and atmosphere or being gay friendly. Hampton's restaurant Brent's, Newport News' 99 Main, and many others in Norfolk's Ghent area offer great experience.
*
And on summer weekends both a friend in Hampton and friends in Virginia Beach (see the photo below) offer relaxing venues for an afternoon escape by their pools. While Virginia is definitely not a place for same sex lovers in many ways, it is possible outside of the rural areas to carve out a decent life - despite the efforts of those like our current governor Bob "Taliban Bob" McDonnell and Ken "Kookinelli" Cuccinelli, our certifiably insane Attorney General, and Christo-fascists in the General Assembly like Bob Marshall. Living well and prospering is the best revenge on such bastards. 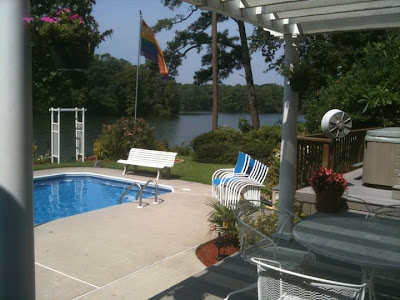