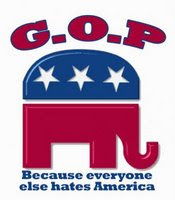 Maybe it's a function of the party now being controlled by its far right Christian base - a base that seems to see itself as exempt from the Commandment against lying and bearing false witness - but whatever the cause the growing flat out untruthfulness of Republican members of Congress is beyond disgusting. They sing a false song of wanting to cut government spending, yet only want to reduce spending that helps the less fortunate while giving more tax breaks and privileges to the wealthiest citizens and huge corporations. Just like with lying, this take from the poor and give to the rich mentality would seem to fly directly in the face of the allegedly Christian principles that the GOP demagogues claim to worship. Hypocrisy doesn't even begin to describe the level of deceit and disingenuousness that is the principal hallmark of today's GOP. The New York Times looks at this deliberate lying and deceit in it's main editorial today in the context of GOP efforts to kill health care reform cut cutting provisions. The message of the editorial needs to be disseminated far and wide because it shows just how despicable leading Republicans have come to be. Here are some highlights:
*
Republicans claim to be deeply worried about the deficit — their favorite political target, followed closely by President Obama’s relentlessly demonized health care reform. So why are they so determined to overturn one of the central cost-control mechanisms of the new reform law?
*
Republicans in both the Senate and the House have introduced bills that would eliminate the new Independent Payment Advisory Board, which is supposed to come up with ways to rein in excessive Medicare spending — and stiffen Congress’s spine.fy">
*
If anything, we fear that the board’s power will be too limited. But its power to curb payments to other providers is projected to save $15.5 billion to $24 billion between 2015 and 2019.
*
That has not stopped Senator John Cornyn of Texas from trying to kill off the board. In July, he introduced the ever so cutely named “Health Care Bureaucrats Elimination Act.” It currently has 11 co-sponsors, and a similar version, introduced earlier in the House by the Republican Phil Roe of Tennessee, has 54 co-sponsors.
*
Neither bill will go anywhere so long as the Democrats run Congress, but expect to hear a lot of hype about bureaucrats hijacking health care — and nothing about the needed savings — in this fall’s campaign.
*
Republicans are also eagerly, and shamefully, pillorying Dr. Donald Berwick, the new head of the Centers for Medicare and Medicaid Services. . . . Dr. Berwick has praised the socialized British health care system, especially for its emphasis on primary care. This country certainly needs to do more to develop its primary care system. And he has, rightly, called for an open discussion of the health care rationing that is already widespread in our system. When insurers decline to cover procedures, or high prices screen out low-income people, that is rationing.
*
Democrats have to counter the Republicans’ demagoguery with facts. Americans need to understand that if Senator Cornyn and others get their way, runaway health care costs will only get worse. Democrats should not be shy about touting reform’s benefits — for improving Americans’ lives or its potential for reducing the deficit.
Posted by Michael-in-Norfolk at Sunday, August 22, 2010