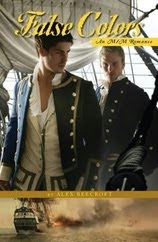 Sometimes I guess I live under a rock or something. The newest issue of Out Magazine has a long article (sorry, it's not available online) on what is apparently the newest rage with many straight women: gay romance novels with lots of male to male sex and romance. Even more surprising, many of the top authors of the genre are outwardly straight married women. One such author is Alex Beecroft, an English housewife turned author who wrote the apparently extremely popular False Colors, set in the 1700's and featuring beautiful sailors. Who would have known? The trend has been going on for a while and may be another aspect of homosexuality going more mainstream - especially if this is what more and more middle class straight women are reading. An article in the Baltimore City Paper looked at the phenomenon over a year ago. Here are some highlights:
*
The romance novel, a static and predictable genre, is undergoing an evolution of sorts: storylines written by straight women for straight women . . . about gay men. Gay men are allowed to read them, of course--there's no gender ID check. But the authors want the books shelved with romance novels, not gay literature, and they are straight women writing the stories that they would want to read. Alex Beecroft, the author of False Colors, an "m/m romance" set in the mid-18th century British navy, doesn't see what the big deal is. "Whether your romance is m/f or m/m, love is the same," she writes in an e-mail from her home in England, "two people, heart and soul, fighting for something beautiful, something worth fighting for." Yes, but is it really a romance novel if there's not a heaving bosom?
*
It seems strange on the surface--gay male romance novels for straight women--but maybe this is just the latest iteration of the age-old against-the-odds, forbidden fruit love story. Whether it's the Capulet who can't be with the Montague, the princess who can't be with the stable boy, the beauty who can't be with the beast, the countless Hollywood leading couples who can't be together because someone is getting ready to marry another, or the two Georgian naval officers who will be hanged if they are discovered, isn't it the same basic story inspiring the romantic imaginations of women through the ages? They can't be together, so they must.

Another thing that seems strange is a straight woman writer who would leave her sex out of her love stories. Who is this woman with the gender-neutral name? Beecroft is a married mother of two. It was her idea, not some editor's or publisher's, to write these kind of stories. "I find it curious that people are surprised that a straight woman would want to write m/m romance, because for me it's such a natural thing," she writes. "It wasn't suggested to me by anyone. In fact, I started imagining stories in which the two heroes would get together pretty much as soon as I hit puberty."
*
Beecroft also sees her stories as opportunities for her to play with and transcend traditional gender roles. "M/M romance can be used to examine relationships which don't suffer from the same sort of built in power imbalances and gender role constraints that make m/f romance such a minefield," she writes.
*
So the evolution is underway, complete with all the false starts and dead ends change brings. But the change is deceptively superficial. Whether m/m or m/f or f/f, the prosaic romance novel is still about escaping with characters who are, above all, true to themselves. Whether they have heaving bosoms or straining packages is of less consequence than whether they are heaving and straining against an oppressive society that would keep them apart. And if their equipment matches, the oppression multiplies, and the romantic-at-heart just might root for them even more.
*
Since I like historical novels and tend to be a romantic, yours truly may have to check the local Barnes & Noble to see what they're stocking. Of course, there's always Amazon as a fall back.
Posted by Michael-in-Norfolk at Tuesday, August 24, 2010

Behind Japan, where bishonen (beautiful young males getting it on with each other) mangas have been gobbled up by women for years.