The Increase of Those with "No Religion" 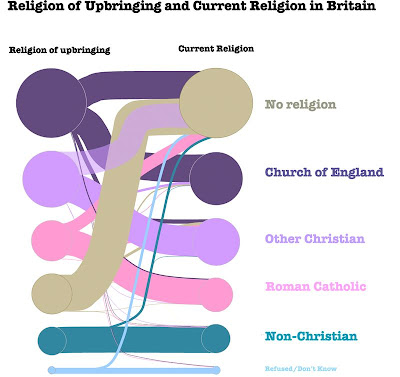 A recent study in the UK has shown a huge increase in the number of people professing no religion. While the non-Christian numbers have held steady, every category of Christian membership has seen decline. Personally, I suspect two of the driving forces of this phenomenon are (1) the anti-knowledge agenda of fundamentalist Christians that makes it difficult for anyone who is educated and rational to continue to subscribe to fundamentalist beliefs, and (2) the constant message of hate that seems to be the predominant message one hears from self-styled Christians. Many churches may be quietly attempting to do good deeds, but their efforts are eclipsed by the efforts of those who stand for intolerance and religious based bigotry. The irony is that its the Christians of this mold who are killing Christianity. Although the world would be well rid of their toxic form of religion.
Posted by Michael-in-Norfolk at Sunday, August 22, 2010

Email ThisBlogThis!Share to TwitterShare to FacebookShare to Pinterest
Labels: decline in religion, former Catholics, no religion

If you've ever lived in the UK or any Commonwealth country, you'll know that C of E is a default religion, the kind you nominate on questionnaires, or which you feel part of because you went to a church-run private school. It's akin to the "no-religion" option.

It astonnishes me that monarchies, where church and sate are constitutionally intertwined, do a better job of keeping the state secular than a (nominal) republic.