Support For Gay Marriage Growing in Every State 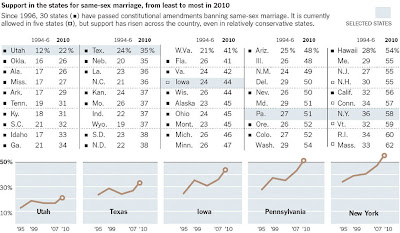 The trend is definitely against the efforts of the Christianists, albeit much slower in some states than other (not surprisingly, in general the lower approval rates correspond with socially and economically backwards states). With the tide long term running against them, we can expect increasing hysteria from the professional Christians who see their cash cow slowly dying before their eyes. They have already lost the battle in 15 states per a recent survey displayed above.
Posted by Michael-in-Norfolk at Monday, August 23, 2010