The Obama Administration Remains Tone Defeaf and Self Destructive 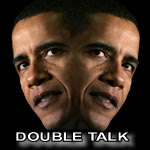 Kerry Eleveld has a good analysis of the White House's seemingly deliberate efforts to alienate LGBT voters - and progressives in general - over at The Advocate. Gays - and gay bloggers in particular - have been labeled as pesky as have liberals in general. Never mind that we are among those who help put Obama's sorry ass in office unlike the Republicans he seems to constantly court even though they continue to do all in the power to undercut his programs and destroy him. Frankly, I do not understand the mindset. Especially since it only serves to kill enthusiasm among the Democratic Party base as we approach critical elections. One can truly ask WTF are Obama and his hair brained advisers thinking? Meanwhile, local Democratic Committees are charged with rallying the base that the White House is so carefully alienating. Here are some highlights from Kerry's piece:
*
On LGBT and mainstream issues alike, the Obama administration finds progressives irritating. But they let their frustration insulate them from criticism at their own peril on marriage equality.
*
But Gibbs’s indiscretion last week isn’t the first instance of this administration taking a hostile posture toward a press corps that, quite frankly, largely praised it during the campaign and was probably predisposed to liking it initially. . . . Some of these considerations no doubt crossed Maureen Dowd’s mind last week as she opened her Sunday column with “Robert Gibbs should be yanked as White House press secretary.”
*
But of all the insights that emerged from the meeting activists attended at the White House, the most fascinating for me pertained to marriage equality — a subject the administration would clearly harpoon if it could.
*
In fact, I get the distinct feeling the White House hopes it can simply duck the marriage question straight through 2012, and I’d also bet dollars to doughnuts it won’t be able to. What became clear to me while interviewing attendees of the August 6 meeting was that while the friendly audience may have cut the administration some slack on legislative items like the Employment Non-Discrimination Act and the Defense of Marriage Act, the one place advocates unapologetically stood their ground was on marriage equality.
*
Make no mistake, this is an issue that the president’s chief advisers have misjudged from day one. They underestimated how angry people were that candidate Barack Obama wasn’t more vocal in his opposition to Proposition 8; they dismissed the devastation felt by millions of queers who poured their hearts into electing Obama only to watch Prop. 8 proponent Rick Warren give the invocation at the inauguration; they remained silent in 2009 as gay Mainers fought to preserve their right to love, marry, and build a life with their partner; and then David Axelrod reassured the nation two weeks ago that the president still opposes granting the freedom to marry to all Americans.
*
The president and his advisers may hope to stay below the radar on the question of marriage straight through 2012, but they are flying blind if they can’t see that activists across the nation are already seething.
*
Nothing tells individuals that they are second or third class citizens more strongly than the continued refusal to support full recognition of their committed life relationships. It's pretty much a loud and clear message of "f*ck you" and many in the LGBT community are getting that message loud and clear from Obama.
Posted by Michael-in-Norfolk at Monday, August 23, 2010