Where the Boys Are 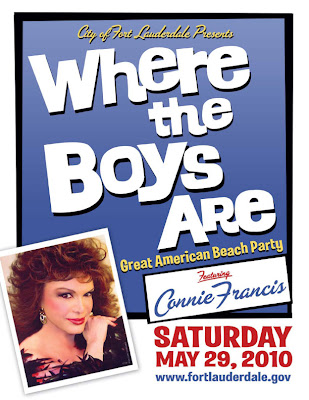 This weekend in Ft. Lauderdale - actually on this past Friday - the City celebrated the 50th anniversary of the song and movie "Where the Boys Are" which I remember well from when I was a kid. In retrospect, I guess I should have known what was up with myself even then since I focused more on the boys in the film than the girls. In any event, walking along the beach - particularly along Sebastian Beach - there were loads of posters like the one set out above. Saturday Connie Francis also performed her famous song. While we missed the event, it certainly brought back memories seeing all of the posters and event details. Here are highlights from a release issued by the City of Ft. Lauderdale that also has a link to a video clip of Francis' arrive in the city:
*
Connie Francis still knows how to make an entrance! Riding in a vintage red Cadillac convertible, the star of the 1960 classic movie "Where The Boys Are" recently returned to Fort Lauderdale Beach to announce plans for the “Great American Beach Party,” a major special event scheduled for May 29, 2010 that will celebrate the film’s 50th Anniversary.
*
We’re honored to welcome Connie Francis back to Fort Lauderdale Beach to mark this historic occasion,” said Fort Lauderdale Mayor John P. “Jack” Seiler at the kick-off gathering. “It’s a unique way to unveil our plans for a one-of-a-kind event that pays tribute to this film and captures the spirit and nostalgia of the 1960s.”
*
The Great American Beach Party with Connie Francis will take place on Saturday, May 29, 2010, and will feature a day and evening full of exciting activities on Fort Lauderdale Beach.
Read the "Where The Boys Are" event flyer
*
The free event will begin at approximately 11:30 a.m. when a portion of Fort Lauderdale’s world famous A1A will be transformed into an entertainment mecca, featuring music, live performances, and activities for the entire family.
*
Live bands will perform classic hits from the 1950s and ‘60s throughout the day in the vicinity of A1A and Las Olas Boulevard. Children and adults will enjoy an array of activities including hula hoop, limbo and Twister contests, a water balloon toss and a sand castle building competition.
Posted by Michael-in-Norfolk at Monday, May 31, 2010