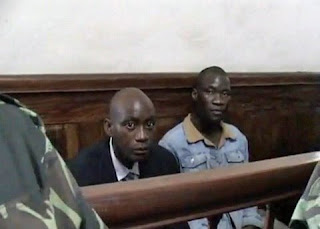 In an apparent display that international pressure and condemnation can make a difference with anti-gay regimes and countries, the President of Malawi has pardoned and freed Steven Monjeza and Tiwonge Chimbalanga were sentenced to 14 years hard labour earlier this month. Unfortunately, the couple still faces danger from a homophobic population and would appear best served if they can find a way to leave Malawi. Sadly, their own families will not welcome them -something which as a parent I believe speaks volumes about their families and parents - none of it good. To reject one's child this way indeed demonstrates to me that the ones who are f*cked up are the parents. I wish Tiwonge Chimbalanga and Steven Monjeza the best of luck and hope they find a way out of Malawi quickly. Here are some story highlights:
*
BLANTYRE, Malawi — A gay couple from Malawi have kept out of the public eye after being pardoned and freed from prison, in what a relative said Sunday was a deliberate decision prompted by the conservative view of homosexuality in the southern African country.
*
Tiwonge Chimbalanga and Steven Monjeza were released late Saturday, hours after President Bingu wa Mutharika pardoned them without condition. But in giving his pardon, which he said was on "humanitarian grounds only," Mutharika warned that homosexuality remains illegal in the conservative southern African country. Activists said late Saturday that they were searching for a safe house for the couple, fearing they could be attacked upon release.
*
Malawi had faced international condemnation for the conviction and harsh sentence given to the two men, who were arrested in December, a day after celebrating their engagement. Malawi is among 37 African countries with anti-gay laws, and strong attitudes against homosexuality.
*
Their release was welcomed by the U.N. Secretary-General Ban Ki-moon, international rights groups and the White House. In Washington, White House spokesman Robert Gibbs praised the move, urging an end to "the persecution and criminalization" of sexual orientation and gender identity.
*
Would that Barack Obama would follow Gibbs' statement and order an immediate end to discharges under DADT.
Posted by Michael-in-Norfolk at Monday, May 31, 2010

I watched a Rachael Maddow segment with a book author who works to change gays to straights, and this case was invoked. Malawi's government was using this man's book to support their criminalization. It was awful. I'm glad to hear this.