Christo-Facsist Loon Warns of "Gay Take Over" of Military 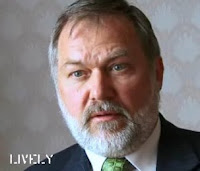 I have written about Scott Lively before and his involvement in both "ex-gay" programs and his book, "The Pink Swastika" which has been discredited by legitimate historians. In my opinion, to say that Lively belongs in a mental institution is being kind. From e-mail exchanges and other run ins with the man I had some years back, Lively is beyond unhinged and I would wager that he is another George Rekers. Simply put, no one is that hysterically anti-gay unless they are a self-loathing closet case (and there are such rumors about Lively and alleged same sex activities).
*
Now, Lively - who helped set the stage for anti-gay legal persecution in Uganda - is foaming at the mouth and claiming that a repeal of DADT will result in a gay take over of the U.S. military. How individuals like Lively are not institutionalized, not to mention actually listened to by the ignorant and the bigoted is mind numbing. Lively's ability to continue disseminating utter lies and defamatory fiction against gays underscores yet again the failure of the mainstream media to call out the nutcases and flat out discredit them on a national stage. Out of apparent desire to appear solicitous to religion, utter frauds, lunatics and con-artists continue to fleece the unwary. Jim Burroway at Box Turtle Bulletin has good coverage on Lively's latest lunacy Here are some highlights:
*
Holocaust revisionist Scott Lively has a new post up at his web site, in which he promises to personally go all-out to oppose the repeal of “Don’t Ask, Don’t Tell” by distributing copies of his book, The Pink Swastika to every member of the Senate — assuming he can get the donations he needs. Yes, there’s a fundraising angle, but that shouldn’t distract anyone from understanding that Lively is a true believer in his Holocaust revisionism whether it pays him a red cent or not.
*
In the Pink Swastika, Lively posits that the German Nazi movement was, at it’s very core, a homosexual movement, and that militant and violent fascism is the core feature and goal of the LGBT equality movement. He uses that same twisted view of history to argue against DADT’s repeal.
*
Lively certainly can’t be faulted for having an overly-active imagination. Consider his prediction of what will happen if DADT is repealed. First, if gays are allowed in the military, then straight people will refuse to serve. Those straights who remain will turn to violence in response to the unrelenting sexual harassment. That violence will lead to “politically correct” sensitivity training, which will prompt a further exodus. This then leads to a draft, which would be supported by the “anti-war Lefties.” But that sensitivity training? It won’t work, so they will have to segregate the services into gay and straight units. And that’s when the homosexuals take over all the branches of the military — just like, he says, what happened in Nazi Germany.
*
But in all seriousness, the truly disturbing part of this whole thing is this: Lively’s lunacy is easy to laugh at when he lets his paranoia run wild here in the U.S. But when he exports it to Russia, Eastern Europe or Uganda, it causes real and lasting damage. He’s a buffoon, but that doesn’t mean he’s not mortally dangerous.
*
As Jim notes, Lively's craziness would be comical but for the fact that there are those who gladly accept his deranged message. And with homophobic members of the senior brass at the Pentagon looking for ways and reasons to torpedo the repeal of DADT, Lively's poisonous lies need to be exposed and fully discredited.
Posted by Michael-in-Norfolk at Wednesday, June 02, 2010