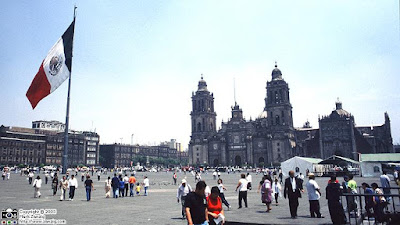 While Bob "Taliban Bob" McDonnell and Ken "Kookinelli" Cuccinelli continue to do all in their power to drive LGBT Virginians from the state - not to mention make the state toxic from the perspective of potential LGBT tourists - Mexico City, the capital of Catholic Mexico, is working to make itself a gay travel destination. Sadly, it is yet another instance of what used to be considered part of the "third world" now outstripping most of the states in the USA in terms of tolerance and progressiveness. One has to wonder when the USA is going to wake up. Hate merchants like Tony Perkins are given platforms for their poison by the mainstream media again and again and NEVER challenged on the illegitimacy of their anti-gay positions (CNN just did this yet again here). Here are some highlights from EnTerra.com on Mexico City's new LGBT tourism push:
*
Mexico has traditionally been a conservative Catholic country but Mexico City has developed a popular and vibrant gay scene in recent years. Gay tourism is seen as a valuable asset to cities. In the US, it is estimated that the yearly economic impact of gay and lesbian visitors is $70 billion.
*
Mexico City tourism minister Alejandro Rojas is planning for the increase in gay tourism that he says will result from the city's recent decision to legalize same-sex marriage.
*
Tourism officials in Mexico say they hope to attract gay couples who want to marry in the capital city. According to Press Association, Alejandro Rojas, the city's tourism secretary, said: "Mexico City will become a centre, where (gay) people from all over the world will be able to come and have their wedding, and then spend their honeymoon here.
*
"We are already in talks with some travel agencies that are planning to offer package tours that include flights, hotels, guides, and everything they need for the wedding, like banquets. We are going to become a city on a par with Venice or San Francisco."
*
Rojas says that the city will be investing 100 million pesos into a new gay-friendly hotel in the Zona Rosa and will support the development of other businesses that cater to the GLBT market.
*
Mexico City will become a truly 'gay friendly' city, one in which all GLBT people can live and visit with safety, dignity, and joy.
*
I can't help but ask myself WTF is wrong with so much of the USA?
Posted by Michael-in-Norfolk at Saturday, June 05, 2010

I'm enjoying reading these blogs. I wonder if it's the U.S.A. per se, or just small mindedness. I'm here in the West of Ireland, in a relationship with another woman. Both of us were previously married and have 7 kids between us. Gay tourism? Gayness itself is still coming out of the caves!