When Will Family Research Council be Classified as a Hate Group?

I've been following the lies and and anti-gay viciousness peddled by Tony Perkins (at right) and Family Research Council ("FRC") - one of whose co-founders was George "Rentboy Lover" Rekers - for roughly a decade. Honestly, I thought it was possible to stoop lower than FRC does on a virtually daily basis. Or so I had thought. Now it turns out that FRC spent $25,000 lobby Congress in an effort block a resolution condemning the proposed Ugandan "Kill the Gays Bill." That's right - $25,000 in an attempt to secure passage of legislation that would subject gays to prison and, in some cases, the death penalty. Personally, I do not see how anyone who advocates death for others because they don't conform to a particular religious beliefs can call themselves Christian. Joe Jervis at Joe By God has the details and here are highlights:
*
It's time for the Southern Poverty Law Center to reclassify the Family Research Council as an official hate group, not merely anti-gay as they are now listed. According to the FRC's official lobbying report for the first quarter of 2010, they paid two of their henchmen $25,000 to lobby Congress against approving a resolution denouncing Uganda's plan to execute homosexuals. The resolution passed in the Senate on April 13th, but remains languishing in the House almost four months after being referred to the Foreign Affairs Committee. Did the FRC's lobbying kill it? As we learned last week with Malawi, international pressure CAN sway even the most virulently anti-gay government.
*
Below are three screencaps of the 20-page Family Research Council lobbying report supplied to me by Duncan Osbourne at Gay City News. Among the other items they lobbied against are the overturn of DADT and DOMA, which is to be expected. But it's almost astounding, almost, that they would lobby the members of Congress against denouncing the death penalty for LGBT people. THIS needs to fucking THROWN in Tony Perkins' and Peter Sprigg's smirking faces the next time they appear on cable television to speak in soothing voices about the FRC's godly gentle love for homosexuals. The proof is right below on official United States government stationery. 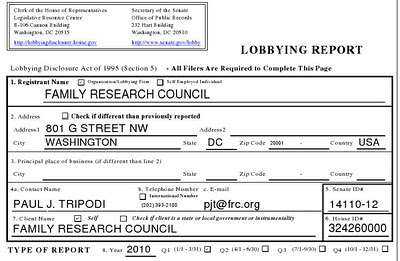 The FRC is a truly evil organization. My parents had pamphlets from them on how to "cure" the proto-homosexual. It was disgusting. What kills me is when organizations legitimize their arguments. CNN just ran an opinion piece by mr. Perkins. It was a disturbingly illogical and hateful artilce.

And it appeared on the CNN front page.

Here is the link.