Surf's Out - DNA Looks at GaySurfers.net 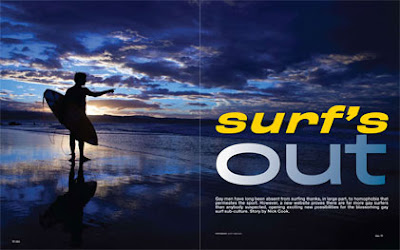 Not too long ago I posted about a new website/group for gay surfers - a site that I've joined myself as an out gay surfer. I hope the site in time dispels the macho image of uber-heterosexual surfers. As members of gaysurfers.net are finding out, there are far more of us than anyone knew. Now DNA Magazine - a major Australian gay magazine (subscription required) has picked up on the website and has put together a great article that includes interviews with some of the new group's members. Like many sports, surfing is a sport where homophobia needs to cease being acceptable and a sport where one is judged on your ability, not who you love or sleep with. The article is lengthy, so I encourage you to read the full article. Here are some highlights via the gaysurfers.net site:
*
Gay men have long been absent from surfing thanks, in large part, to homophobia that permeates the sport. However, a new website proves there are far more gay surfers than anybody suspected, opening exciting new possibilities for the blossoming gay surf sub-culture.
*
Gays have always been so conspicuously absent from surf culture that Matt Warshaw, author of the San Francisco-based Encyclopaedia Of Surfing, has wondered aloud if there are any. “If there was going to be a place where there are openly gay surfers, this is it, but you just don’t see it,” he says. “I’m baffled whether it’s a sport that has happily or unhappily closeted surfers or if it’s so staunchly hetero that it’s like a force-field to keep gays out.”
*
That question has been resoundingly answered by a new website, gaysurfers.net, which has proven that gay surfers definitely exist and in far greater numbers than anybody suspected. The website is a social network that’s allowing gay surfers to connect with each other in a way that’s never been possible before and they’re flocking to the site. It came online in February this year and within weeks had more than 250 members, a figure which climbed above 600 in the fortnight we were watching it. Members create profiles – often anonymously – and then get in touch with each other as they check out the gay surfing articles and lists of gay-friendly surf spots. It’s obvious from the almost overwhelmingly superlative praise it’s received from grateful members that the site has met a very real need.
*
Robbins Thompson, who spent four years rated in the top five on the American professional circuit, . . . is the site’s creator. He says he built it because he found it impossible to meet other gay surfers anywhere else. “In the past I have met about two or three and they were not out. They were all very scared of being outed and rejected by the surfers from their community,” he says. “I believe there is a surf culture beyond the macho young man and there are things we want to share with other gay surfers beyond dating. I was hoping someone out there would build this community, but it never happened. So I decided to do it myself.”
*
Changing the homophobic attitude among straight surfers is one of the website’s key goals. “We have two main objectives,” Thomas says. “To bring gay surfers together, because meeting other gay surfers with similar issues across the world will help those in need, and to help change public awareness. Letting the world know about such a community will help fight against homophobia and discrimination. It will hopefully help to reach the more closeted surfers who need this website the most.”
*
It seems the experience of gay surfers depends largely on where they are in the world. While most of those we spoke to from Australia and America reported some degree of anti-gay sentiment, those in Europe said they had suffered virtually no homophobia. “I never have felt hostility to me on behalf of other surfers, except when I prick them waves [cut in line while surfing],” says Guillaume, who surfs in southern France. “I don’t know gay surfers. I am the kind of solitary surfer. I focus on my sport. In reality, the fact of surfing with straight or gay surfers worries me little.”
*
Now that gay surfers have a way to find each other, to realise they’re not alone and that their sport isn’t as hostile as they might have thought, that’s hopefully what will happen.
Posted by Michael-in-Norfolk at Wednesday, June 02, 2010