Reckoning in the Gulf of Mexico 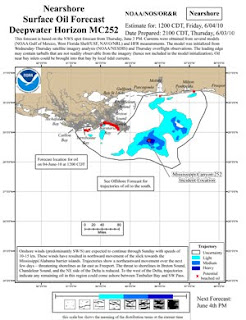 My post yesterday on the Gulf of Mexico oil spill catastrophe focused on the local concerns of residents here in Key West and my own misgivings in terms of trusting BP with control of anything going forward. The lead editorial in the Key West Citizen underscores local distrust of BP. From what has been made public to date, it sounds as if BP broke rules and engaged in actions that the head of the Transocean drill team objected to - and 11 individuals likely paid with their lives when the objected procedure caused the well and platform to explode. The environmental loses since then have been staggering. The New York Times has a spot on editorial that lays out the federal government's much belated response to the disaster. The sad reality, however, is that no amount of money will replace the lost wildlife or the damage to delicate ecological systems. The second sad reality - one that locals here are very much afraid of - is the fact that even if they prevail in lawsuits against BP and other responsible parties, it could be decades before any money is received by those whose livelihoods have been destroyed in the interim. Those who want to see the cap on BP's liability removed should sign the petit1on to Congress here. Now, here are Highlights from the Times:
*
The spill, the worst in United States history and growing more damaging by the day, cries out for accountability and appropriate punishment. Attorney General Eric Holder did not name specific targets, but BP, Transocean — the rig operator — and other important subcontractors like Halliburton are obvious candidates.
*
Justice’s investigation will run parallel to an inquiry by a special commission appointed by President Obama to discover the causes of the disaster, assess the performance of federal oversight agencies and recommend ways to prevent similar calamities. The White House must take special care that both are allowed to do a complete job.
*
Unlike the Justice Department, the commission does not have subpoena powers. Congress should grant that power if only to make sure that witnesses from an industry that is accustomed to going its own way actually show up.
*
As Mr. Holder knows, the legal journey will be long and arduous. Exxon did not finally settle up for damages related to the 1989 Exxon Valdez spill — in addition to the billions it paid in cleanup costs — until a Supreme Court decision in 2008. BP is responsible for containing the gulf spill and cleaning it up, but the fines it must ultimately pay, as well as compensatory damages to injured parties, will depend in part on the whether the company can be shown to have broken the law.
*
One relevant law is the Oil Pollution Act of 1990, enacted after the Exxon Valdez spill, which imposes monetary penalties for every barrel of spilled oil — even if negligence is not found, but more if it is. Another is the Clean Water Act, which carries both civil and criminal penalties for polluting waterways. BP could also be found negligent under the Marine Mammal Protection Act because it failed to obtain necessary federal permits to drill in areas inhabited by endangered whales.
*
Senator Barbara Boxer, who was pressing Mr. Holder to act, raised one more ominous possibility: that BP may have made false and misleading statements to federal authorities in the 2009 exploratory drilling plan it submitted to the Minerals Management Service. The plan asserted that the company had “proven equipment and technology” to respond to a blowout. Given the ad hoc nature of BP’s response, Ms. Boxer has suggested, that assertion now seems misleading or even false.
*
There are extraordinarily tough times ahead for the gulf and the region’s residents. That BP will also suffer does not trouble us in the least.
Posted by Michael-in-Norfolk at Friday, June 04, 2010