Changing Attitudes Towards Gays - And Views of Homophobes as Closet Cases 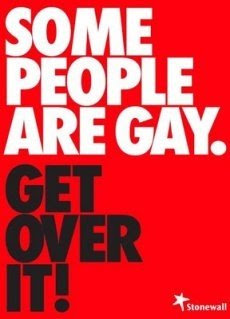 I have mentioned in passing a recent Gallup poll that must be making the fundies truly convulse on the floor with spittle flying: For the first time, the percentage of Americans who perceive “gay and lesbian relations” as morally acceptable has crossed the fifty percent (50%) mark. The Gallup survey also shows that gay acceptance among men has increased, particularly among younger men who do not even remember the days when being gays was considered a form of clinical mental illness. All of this is tangible proof that the Christianists are losing the culture wars even if they continue to win some battles. In a New York Times op-ed column that looks at this development, the other encouraging trend is that increasingly the most focal homophobes are being perceived as closet cases reacting against their own homosexual urges. Maybe Tony Perkins, Robert Knight Peter Sprigg, et al, need to wake up to the fact that their loud protestions against gays say more about them than your avaeage gay American. Here are some column highlights:

*
Last week, while many of us were distracted by the oil belching forth from the gulf floor and the president’s ham-handed attempts to demonstrate that he was sufficiently engaged and enraged, Gallup released a stunning, and little noticed, report on Americans’ evolving views of homosexuality. Allow me to enlighten:
*
1. For the first time, the percentage of Americans who perceive “gay and lesbian relations” as morally acceptable has crossed the 50 percent mark. (You have to love the fact that they still use the word “relations.” So quaint.)
*
2. Also for the first time, the percentage of men who hold that view is greater than the percentage of women who do.
*
3. This new alignment is being led by a dramatic change in attitudes among younger men . . . the percentage of men ages 18 to 49 who perceived these “relations” as morally acceptable rose by 48 percent, and among men over 50, it rose by 26 percent.
*
W]hat’s driving such a radical change in men’s views on this issue . . . Here are three theories:
*
1. The contact hypothesis. As more men openly acknowledge that they are gay, it becomes harder for men who are not gay to discriminate against them. And as that group of openly gay men becomes more varied — including athletes, celebrities and soldiers — many of the old, derisive stereotypes lose their purchase.
*
2. Men may be becoming more egalitarian in general. As Dr. Kimmel put it: “Men have gotten increasingly comfortable with the presence of, and relative equality of, ‘the other,’ and we’re becoming more accustomed to it. And most men are finding that it has not been a disaster.”
*
3. Virulent homophobes are increasingly being exposed for engaging in homosexuality. Think Ted Haggard, the once fervent antigay preacher and former leader of the National Association of Evangelicals, and his male prostitute. . . . Or George Rekers, the founding member of the Family Research Council, and his rent boy/luggage handler. Last week, the council claimed that repealing “don’t ask, don’t tell” would lead to an explosion of “homosexual assaults” in which sleeping soldiers would be the victims of fondling and fellatio by gay predators. In fact, there is a growing body of research that supports the notion that homophobia in some men could be a reaction to their own homosexual impulses. Many heterosexual men see this, and they don’t want to be associated with it.
*
As for the aversion among men, it may be softening a bit. Professor Savin-Williams says that his current research reveals that the fastest-growing group along the sexuality continuum are men who self-identify as “mostly straight” as opposed to labels like “straight,” “gay” or “bisexual.” They acknowledge some level of attraction to other men even as they say that they probably wouldn’t act on it, but ... the right guy, the right day, a few beers and who knows. As the professor points out, you would never have heard that in years past.
*
All together now: stunning.