BP Cannot Be Trusted to Stop Spill or Process Claims 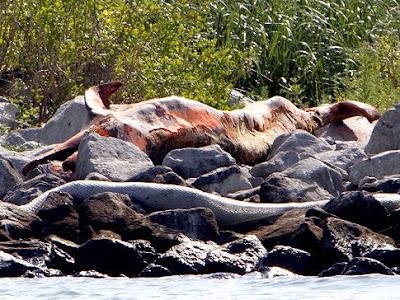 Here in Key West the fear of the approaching environmental disaster is becoming palpable as is the fear that the region's tourism industry will be destroyed. Also palpable is the total distrust of leaving anything up to BP which seems to be being aided and abetted by the U.S. government which is allowing BP to keep the media away from areas in an effort to avoid damaging photos from hitting the air waves and thus sparking total fury and outrage. Some have criticized my post that suggested that BP North American assets be placed into temporary receivership, but to be honest I do not see BP doing all that should and could be done. After yesterday's incredible snorkeling and kayaking cruise, it literally sickens me to think of all the beauty we saw about to be potentially destroyed. The photo of the dead dolphin above reminds me of the possible fate of the happy and playful dolphins we saw just yesterday. Does BP give a damn about it? I doubt it - or not beyond worries of what money may be lost. The following are highlights from the New York Daily News :
*
Here's what President Obama didn't see when he visited the Gulf Coast: a dead dolphin rotting in the shore weeds.
*
"When we found this dolphin it was filled with oil. Oil was just pouring out of it. It was the saddest darn thing to look at," said a BP contract worker who took the Daily News on a surreptitious tour of the wildlife disaster unfolding in Louisiana.
*
His motive: simple outrage. "There is a lot of coverup for BP. They specifically informed us that they don't want these pictures of the dead animals. They know the ocean will wipe away most of the evidence. It's important to me that people know the truth about what's going on here," the contractor said.
*
"The things I've seen: They just aren't right. All the life out here is just full of oil. I'm going to show you what BP never showed the President."
*
After checking that he was unobserved, he motored out to Queen Bess barrier island, known to the locals as Bird Island. The grasses by the shore were littered with tarred marine life, some dead and others struggling under a thick coating of crude.
*
"When you see some of the things I've seen, it would make you sick," the contractor said. "No living creature should endure that kind of suffering."
*
The uninhabited barrier islands are surrounded by yellow floating booms, also stained black, that are supposed to keep the oil out. It's not working.
"That grass was green a few weeks ago," the contractor said. "Now look. ... This whole island is destroyed. How do you write a check for something like this?"
*
He said he recently found five turtles drowning in oil. "Three turtles were dead. Two were dying and not dead yet. They will be," he said. As the boat headed back amid the choppy waves, a pod of dolphins showed up to swim with the vessel and guide it to land. "They know they are in trouble. We are all in trouble," the contractor said.
*
BP's central role in the disaster cleanup has apparently given the company a lot of latitude in keeping the press away from beaches where the oil is thickest. On Monday, a Daily News team was escorted away from a public beach on Elmer's Island bycops who said they were taking orders from BP.
*
38% of the Gulf of Mexico is now closed to fishing and the area involved will only increase. It is beyond pathetic that the President of the United States is shown what a private company wants him to see. You talk about an ass backwards scenario. Meanwhile, BP diddles rather than simply totally destroying the leaking well - likely because it wants to savage the well and save money. And the U.S. government likewise dawdles away time as the disaster grows. The Washington Post looks at the potential economic disaster which will be piggy backing the environmental nightmare. Here are highlights:
*
[T]he economic impact of the nation's worst ever oil spill may be just beginning. With the vast majority of the oil floating offshore, where it will land and whom it will affect have become a guessing game fraught with worry. Wherever the oil goes, it threatens to obliterate billions of dollars for the region's tourism and fishing industries.
*
At stake are industries that employ tens of thousands of people and generate billions of dollars in economic activity for coastal areas stretching hundreds of miles. . . . For gulf regions from Texas to Key West, commercial fishing contributes $1 billion to GDP, tourism and recreation contribute $13 billion, . . .
Posted by Michael-in-Norfolk at Thursday, June 03, 2010