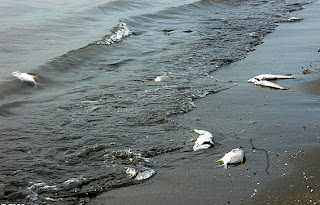 With the British Petroleum oil spill disaster continuing to see huge amounts of oil being released into the Gulf of Mexico, the political enemies of the Obama administration continue to depict the disaster as Obama's Katrina. This view, of course conveniently re-writes history in therms of the abject failure of the Bush/Cheney regime to properly react to the Hurricane Katrina debacle even as it played out worldwide on television. This view also conveniently ignores the fact that much of the laxness in regulation of offshore drilling likewise traces back directly to the deregulation mantra of Bush/Cheney and the Congressional GOP. Despite my past experience in the oil industry, I am finding no sympathy for BP as it becomes increasingly apparent that safety issues were ignored and that even now more concern seems to be focused on PR and saving money that ending the catastrophe that BP's negligence set in motion. That, however, does not excuse Obama and company for their flawed response to the disaster and Obama's failure to provide the strong leadership that those who elected him expect. Frank Rich has a good column in today's New York Times that looks at the President's fumbled handling of this ongoing disaster. Here are some highlights:
*
FOR Barack Obama’s knee-jerk foes, of course it was his Katrina. But for the rest of us, there’s the nagging fear that the largest oil spill in our history could yet prove worse if it drags on much longer. It might not only wreck the ecology of a region but capsize the principal mission of the Obama presidency.
*
Before we look at why, it would be helpful to briefly revisit that increasingly airbrushed late summer of 2005. Whatever Obama’s failings, he is infinitely more competent at coping with catastrophe than his predecessor. President Bush’s top disaster managers — the Homeland Security secretary, Michael Chertoff, as well as the notorious “Brownie” — professed ignorance of New Orleans’s humanitarian crisis a full day after the nation had started watching it live in real time on television. When Bush finally appeared, he shunned the city entirely and instead made a jocular show of vowing to rebuild the coastal home of his party’s former Senate leader, Trent Lott. He never did take charge.
*
The Obama administration has been engaged with the oil spill from the start — however haltingly and inarticulately at times. It was way too trusting of BP but was never AWOL.
*
Obama’s news conference on Thursday — explaining in detail the government’s response, its mistakes and its precise relationship to BP — was at least three weeks overdue. It was also his first full news conference in 10 months. Obama’s recurrent tardiness in defining exactly what he wants done on a given issue — a lapse also evident in the protracted rollout of the White House’s specific health care priorities — remains baffling, as does his recent avoidance of news conferences. Such diffidence does not convey a J.F.K.-redux in charge of a neo-New Frontier activist government.
*
Long before Obama took office, the public was plenty skeptical that government could do anything right. Eight years of epic Bush ineptitude and waste only added to Washington’s odor. Now Obama is stuck between a rock and a Tea Party. His credibility as a champion of reformed, competent government is held hostage by video from the gulf. And this in an election year when the very idea of a viable federal government is under angrier assault than at any time since the Gingrich revolution and militia mobilization of 1994-5 and arguably since the birth of the modern conservative movement in the 1960s.
*
The new American “culture war,” Arthur C. Brooks wrote in The Washington Post, is not “over guns, gays or abortion” but pits “the principles of free enterprise” against the “European-style statism” he accuses Obama of fomenting. . . . The stakes are high. To win this culture war, the right must rewrite history — and not just that of the Bush response to Katrina. In his jeremiad, Brooks held only “government housing policy” responsible for the 2008 economic meltdown and gave a pass to what he regards as an already overregulated Wall Street. Palin has brazenly accused Obama of being in financial hock to Big Oil when it’s her own “drill, baby, drill” party that has collected three-quarters of Big Oil’s campaign cash for decades.
*
The Tea Party is meanwhile busy rewriting America’s early history under Beck’s tutelage by enforcing a vision of the Constitution tantamount to the Creationists’ view of Genesis. We must obey the words of the founding fathers literally — or what the Tea Partiers think those words to be.
*
The only good news from the oil spill is that when catastrophe strikes, even some hard-line conservatives, like Gov. Bobby Jindal of Louisiana, start begging for the federal government to act, and act big. It’s the crunch moment for government to make its case — as Obama belatedly started to do on Thursday. But words are no match for results. As long as the stain washes up on shore, the hole in BP’s pipe will serve the right as a gaping hole in the president’s argument for expanded government supervision of, for starters, Big Oil and big banks. It’s not just the gulf that could suffer for decades to come.
Posted by Michael-in-Norfolk at Sunday, May 30, 2010