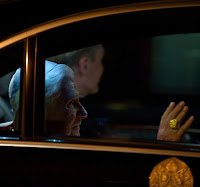 Despite the Vatican's disingenuous and clumsy damage control efforts, the sex abuse scandal continues to rage across much of Europe and embarrassingly for Papa Ratzi, a growing number of Catholics in Germany appear to be leaving the Church. Meanwhile, a German bishop has submitted his resignation over allegations of physical beatings of children over the years. The Church hierarchy just doesn't grasp the fact that people are past believing the pronouncements of those who have shown themselves to be liars and morally bankrupt. Only dramatic and drastic changes - something not often associated with the Catholic Church - are likely to stem the exodus of disgusted and shocked Church members who have come to realize that they have allowed their lives to be controlled - and often warped - by those deserving of no respect or allegiance. Here are highlights from the New York Times on the ongoing PR disaster in Europe:
*
BERLIN — A German bishop accused of beating children decades ago when he was a priest has tendered his resignation to Pope Benedict XVI, the diocese in Augsburg said Thursday, the latest jolt to the Roman Catholic Church in Germany as it grapples with a swirling sexual abuse scandal.
*
The accused man, Bishop Walter Mixa, was one of the church’s most prominent and outspoken conservatives in Germany, and he aggressively defended himself for weeks against charges of physically abusing children in a Bavarian orphanage. Accusations have also surfaced of financial irregularities at the orphanage’s foundation.
*
Opinion surveys here show that the abuse cases and how they were handled by the church have severely damaged the church’s credibility. Municipalities have reported a rising number of Catholics leaving the church since the scandal began. The Augsburg diocese said Thursday that Bishop Mixa had stepped down to prevent further damage to the church and to make a new start possible.
*
The central focus of the church scandal in Germany has been sexual abuse, but corporal punishment in church-run institutions has also attracted public attention. Benedict’s brother, Msgr. Georg Ratzinger, apologized in March for slapping children during his tenure as the director of a choir in the Bavarian city of Regensburg, where he worked from 1964 to 1994. In another measure of the scandal’s toll, the Vatican announced Thursday that the pope had accepted the resignation of Bishop James Moriarty of Kildare and Leighlin in Ireland.
*
The pope has yet to address the scandal in Germany, which has not reached the same scale as the number of abuse cases in Ireland but has nonetheless damaged the church’s reputation and appears to be sapping the ranks of the faithful.
*
The irony is that Benedict XVI wanted to preside over a resurgence of religion in Europe and instead, he is presiding over a self-inflicted suicide of the Catholic Church. Combined with his unpopular reactionary theology, it is a toxic mix.
Posted by Michael-in-Norfolk at Friday, April 23, 2010