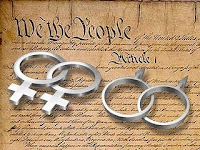 Back when Virginia was considering the "Marshall Newman Amendment" which, when passed in November 2006 wrote discrimination into Virginia's constitution, I participated in several debates against a proponent of the amendment who blithely claimed that with proper wills, powers of attorney, etc., same sex couples were adequately protected. I, of course said that his argument was BS and that equality under the law mean equality in every regard, including marriage. Now, a story out of California forcefully demonstrates yet again why only full marriage equality will afford true equality. All it takes is one reactionary judge who - like so many, including Justice Antonin Scalia - cannot leave his religious extremism at the courthouse door and one's carefully planned legal paperwork can be rendered meaningless. My fellow Bilerico Project contributor, Kate Kendall, has the horrible facts of the situation that strongly argue that the judge and county officials involved need to be immediately fired. The situation would also have likely had a very different ending had Harold and Clay been legally married. The situation is an outrage and demonstrates the fruits of constant Christianist denigration of gay lives and relationships. I'm sure modern day Pharisees like Maggie Gallagher are smiling at their handiwork in this sad case. Here are some highlights from the National Center for Lesbian Rights:
*
Clay and his partner of 20 years, Harold, lived in California. Clay and Harold made diligent efforts to protect their legal rights, and had their legal paperwork in place—wills, powers of attorney, and medical directives, all naming each other. Harold was 88 years old and in frail medical condition, but still living at home with Clay, 77, who was in good health.
*
One evening, Harold fell down the front steps of their home and was taken to the hospital. Based on their medical directives alone, Clay should have been consulted in Harold’s care from the first moment. Tragically, county and health care workers instead refused to allow Clay to see Harold in the hospital. The county then ultimately went one step further by isolating the couple from each other, placing the men in separate nursing homes.
*
Ignoring Clay’s significant role in Harold’s life, the county continued to treat Harold like he had no family and went to court seeking the power to make financial decisions on his behalf. Outrageously, the county represented to the judge that Clay was merely Harold’s “roommate.” The court denied their efforts, but did grant the county limited access to one of Harold’s bank accounts to pay for his care.
*
without determining the value of Clay and Harold’s possessions accumulated over the course of their 20 years together or making any effort to determine which items belonged to whom, the county took everything Harold and Clay owned and auctioned off all of their belongings. Adding further insult to grave injury, the county removed Clay from his home and confined him to a nursing home against his will. The county workers then terminated Clay and Harold's lease and surrendered the home they had shared for many years to the landlord.
*
Three months after he was hospitalized, Harold died in the nursing home. Because of the county’s actions, Clay missed the final months he should have had with his partner of 20 years. Compounding this tragedy, Clay has literally nothing left of the home he had shared with Harold or the life he was living up until the day that Harold fell, because he has been unable to recover any of his property.
*
With the help of a dedicated and persistent court-appointed attorney, Anne Dennis of Santa Rosa, Clay was finally released from the nursing home. Ms. Dennis, along with Stephen O'Neill and Margaret Flynn of Tarkington, O'Neill, Barrack & Chong, now represent Clay in a lawsuit against the county, the auction company, and the nursing home, with technical assistance from NCLR. A trial date has been set for July 16, 2010 in the Superior Court for the County of Sonoma.
*
It is sad beyond words that in the minds of many religious zealots gays and same sex couples are viewed as less than fully human. The irony is that I suspect that it will be the "Godly Christians" who burn in Hell for their misdeeds to their fellow man, not the gays for loving someone of the same gender.
Posted by Michael-in-Norfolk at Sunday, April 18, 2010

To take to loving, committed, HUMAN BEINGS and so thoroughly degrade them is inhuman and evil.