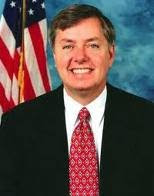 Few things are more fun than watching the far right loonies and their GOP enablers getting into a dust up and attacking each other. Now, Sen. Lindsey Graham (R-S.C.)- long rumored to be gay - is getting a thorough basing by wingnuts who are alleging that Graham is not doing their bidding because - gasp - he's gay and being blackmailed. I for one have no love lost for Graham who I view as an disingenuous liar on most occasions and an example of a self-hating closet case. Nonetheless, it is a sign of the lunacy of the tea party set that anyone who does not meet their level of insanity and hate/race driven politics is now subject to personal attacks and smear campaigns. The Washington Monthly reports on the latest Graham bashing (South Carolina newspapers are also talking about Graham). Here are some highlights:
*
Over the weekend, an even-crazier-than-usual Tea Party event was held in Greenville, South Carolina, and it was, by one account, "probably the craziest, most violence-strewn Tea Party event so far."
*
Put it this way: former Rep. Tom Tancredo (R-Colo.) was the keynote speaker, and he called on Americans to send President Obama "back" to Kenya. He was preceded by a Baptist preacher who said he's prepared to "suit up, get my gun, go to Washington, and do what [the military] trained me to do."
*
But it was William Gheen, the head of a right-wing, anti-immigrant effort called Americans for Legal Immigration PAC, whose remarks were especially ugly. Lindsey Graham wasn't on hand for the event, but Gheen addressed the senator directly: "I'm a tolerant person. I don't care about your private life, Lindsey, but as our U.S. Senator I need to figure out why you're trying to sell out your own countrymen, and I need to make sure you being gay isn't it."
*
Americans for Legal Immigration PAC (ALIPAC) is officially calling for US Senator Lindsey Graham (R-SC) to make his homosexual lifestyle public knowledge in the interest of political integrity and national security...
*
"US Senator Lindsey Graham is gay and while many people in South Carolina and Washington DC know that, the general public and Graham's constituents do not," said William Gheen President of ALIPAC. "I personally do not care about Graham's private life, but in this situation his desire to keep this a secret may explain why he is doing a lot of political dirty work for others who have the power to reveal his secrets. Senator Graham needs to come out of the closet inside that log cabin so the public can rest assured he is not being manipulated with his secret."
*
No wonder Charlie Crist is thinking of possibly running as independent given the ever increasing craziness of the GOP base.
Posted by Michael-in-Norfolk at Wednesday, April 21, 2010

The rational kernel is that what is made public cannot be the basis for blackmail. I agree with the tea-nuts that if he is having sex with men, Senator Graham should come out.

I'd prefer a less (stereotypically) smarmy one to be the first openly gay US Senator, but...