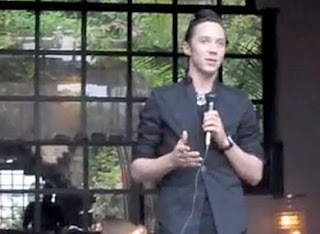 Despite what his detractors may say, I love Johnny Weir - both for his figure skating talent and for his courage in being himself and telling critics to be damned. At a Equality California fundraiser, Weir came about as close to coming out as one can without making an outright declaration. Kudos to Johnny and his in your face refusal to somehow be ashamed of who he is. He's what I wish I had been able to be at a similar age except for the fact that I would not have had my children. The Advocate has more on Weir's appearance and his summation of what gays give to the world:
*
Figure skating star Johnny Weir lent his celebrity to an Equality California event on Sunday in Los Angeles. At the fund-raiser, Weir thanked his family for their support and then spoke frankly about inequality:
*
"Something from the Olympics that I learned is the world is a very, very ugly place. And this community, us, our people, are the people who make it fucking gorgeous. No matter how much people push down on us ... no matter how much they hate people that are different, not only the gay community, but also African-American people, Jewish people ... there's so many things that people focus on and so much what a person is and not who a person is ... If I wanted to get married tomorrow to a woman or to a man, what have you, whatever makes me happy, I'm going to try to do it and I want the freedom to do it. Everyone should have the freedom for that."
*
Johnny, I hope you keep up the great work!
Posted by Michael-in-Norfolk at Tuesday, April 20, 2010