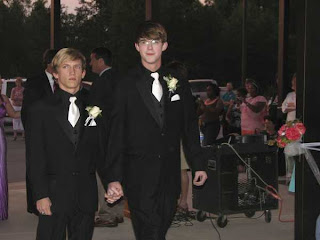 After all the bizarre and heartless things that took place in the Itawamba County school district in Mississippi to block a same sex couple from attending a high school prom, it is nice to be able to report that Bleckley County, Georgia was a study in contrasts in comparison. The Prom itself went smoothly and both school officials and most students seem to not had their heads up their ass about the matter. Derrick Martin and his date, Richard Goodman (pictured at right) made a cute couple and I am glad that the Prom turned out well for them. Sadly, Derrick Martin's parents showed far less class that the supportive parents of Constance McMillen. They threw their son out of their home because of the publicity. Were these horrid parents worried about their son or their own sensibilities. As a parent, I cannot fathom such behavior towards one's child. I hope Derrick puts it behind him in time. Here are some highlights from the Macon Telegraph:
*
Bleckley County High School senior Derrick Martin made history Saturday when he arrived at his high school prom on the arm of another boy. He was the first in his hometown of Cochran — and perhaps in Georgia — to ask permission to take a same sex partner to prom and have his school allow it.
*
About 7:45 p.m., couples started to arrive at the high school in a line of stretch limos, a bus, a John Deere tractor and even carriage and buggy, and afterward walked through a crowd of parents and friends who snapped photos.

When Martin, 18, and his boyfriend Richard Goodman, also 18, stepped onto a makeshift “red carpet” and their names were announced, a few parents whispered but many in the crowd gave him a loud cheer. No one yelled out in protest. “I wonder if they realize what they’ve done,” said Arturro Beeche, a San Francisco professor who flew into Georgia on Friday and drove Martin and Goodman to the prom. “Once it happens in small-town America, it will inspire so many,” he said. Security was tight with at least 15 officers stationed at the high school, and no one could enter the parking lot without a ticket.
*
The move had been met with some conflict, such as talk of a separate prom. A few weeks back, a small group of students held an opposition rally in front of the town courthouse to protest. Martin’s parents also kicked him out of his home after the publicity. But a rally in support of Martin was also held in a Macon park and supporters have donated more than $5,000 for college this fall.
Posted by Michael-in-Norfolk at Monday, April 19, 2010