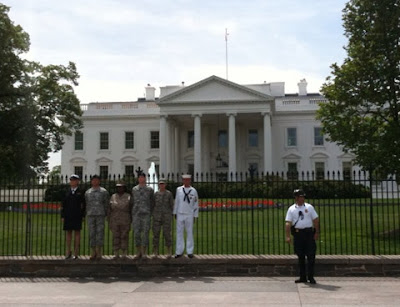 I am a little behind the curve on this story since we had dinner with friends from the Netherlands this evening who have been stuck in the USA due to the airline flight cancellations in Europe because of the ash cloud from the volcanic eruption in Iceland. That said, this afternoon proved newsworthy as six (6) LGBT activists - Lt. Dan Choi, Capt. Jim Pietrangelo II, Petty Officer Larry Whitt, Petty Officer Autumn Sandeen, Cadet Mara Boyd, and Airman Victor Price - chained themselves to the White House gates in protest over Barack Obama's do nothing approach to the repeal of Don't Ask Don't Tell which codifies religious based discrimination against gay service members. Among those who chained themselves were Dan Choi who I had the pleasure to speak with last year as well as Autumn Sandeen who writes for Pam's House Blend and who attended the LGBT Blogger Summit in 2008 with me in Washington, D.C. Today's action followed up activists heckling Obama as he spoke at a fundraiser last night for Senator Barbara Box. The White House reaction to the protests have been troubling for several. The first is Obama's pretense as to why he cannot understand why the LGBT community is not happy with him. Andrew Sullivan summed it up well on his blog this morning:
*
Because, Mr President, it is not enough to be "supportive" of ending "Don't Ask, Don't Tell." When you have the presidency and your party controls both Houses of Congress, it's a matter of having the political will to end it. Not all gay people are HRC-fundraisers. Some are even risking their lives every day for this country, in uniform, only to be treated like second class human beings and citizens by their own government. Their own government? That means you, Mr President and Senator Boxer.
*
More troubling is the fact that the Obama White House closed Lafayette Park in an apparent effort to keep the news media from reporting on what is obviously an embarrassing protests that calls out Obama for lying about his "support" for LGBT equality. I continue to believe that for all of the GOP's nastiness and dysfunctional aspects, Obama runs the risk of leading the Democrats to a debacle in November if the Democrat base is apathetic and stays home on election day. Virginia's 2009 elections ought to be a loud alarm bell to Congressional Democrats, but they and Obama act as if they are all stone deaf. Here are highlights from Pam's House Blend:
*
In a move that suggests the White House is feeling the heat on its slow-motion approach toward repealing DADT, it's now resorted to trying to stop press coverage of direct actions. As Ben Smith of The Politico notes in his post "Most transparent White House ever...", closing Lafayette Park to the public during a demonstration is almost unheard of. Until now, when LGBT military veterans, including barista Autumn Sandeen, chained themselves to the White House fence today.
*
Police chased reporters away from the White House and closed Lafayette Park today in response to a gay rights protest in which several service members in full uniform handcuffed themselves to the White House gate to protest "Don't Ask, Don't Tell." People who have covered the White House for years tell me that's an extremely unusual thing to do in an area that regularly features protests.
*
Personally, I am about over Obama's constant games and failures to deliver on his campaign promises. At some point it is difficult not to feel that his whole campaign - especially as pitched to the LGBT community - was not much more than a calculated lie. Dan Choi summed it up as follows:
*
“We are handcuffing ourselves to the White House gates once again to demand that President Obama show leadership on repealing ‘Don’t Ask, Don’t Tell.’ If the President were serious about keeping his promise to repeal this year, he would put the repeal language in his Defense Authorization budget. The President gave us an order at the Human Rights Campaign dinner to keep pressure on him and we will continue to return to the White House, in larger numbers, until the President keeps his promise to repeal ‘Don’t Ask, Don’t Tell’ this year."
Posted by Michael-in-Norfolk at Tuesday, April 20, 2010