Is There a Link Between Homosexuality and Catholic Church Sex Abuse? 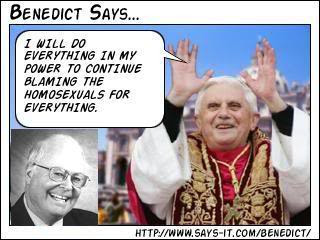 The enemies of gay rights both in the Catholic Church hierarchy and Sycophant organizations like the Catholic League - not to mention our enemies in the "family values organizations - have tried to repeatedly blame the Catholic Church's massive sex abuse scandal on gays in the priesthood. Too often, the media does not challenge them on this lie. Now CNN has a story by Dr. James Cantor, a professor at the Universit y of Toronto Faculty of Medicine, who has been conducting research on the causes of pedophilia for the past 10 years. His answer is a resounding NO, THERE IS NO LINK. Not that legitimate medical and mental health facts make a difference to those who seek to wrongfully denigrate gays at every opportunity. While Cantor likewise says there is no direct connection between celibacy and pedophilia, the Church environment does seem to attrack a disproportionate number of men who have psycho-sexual issues. Here are some highlights:
*
Scientists use the word pedophilia to refer to the sexual preference for children before puberty (usually, before age 11), and the word hebephilia, to refer to the sexual preference for children at puberty (usually, ages 11 to 14).
*
Although there have been claims that child molestation is a result of homosexuality (or of celibacy), there is absolutely no basis in science for either conclusion. The scientific evidence instead suggests that pedophilia and hebephilia are caused by atypical brain development occurring near or before birth.*
MRI research has found very large differences in brain structure between men who have a sexual preference for children and those who have a sexual preference for adults. These differences were detected as regions of low density in brain tissue called white matter. White matter is what connects the various parts of the brain, enabling it to function as a whole. The white matter that is affected in pedophilia and hebephilia is the white matter that connects the parts of the brain that respond to sexual images. (Specifically, these regions were the superior occipitofrontal fasciculus and the arcuate fasciculus.)
*
There does not exist any evidence that gay men share this feature of decreased white matter. In fact, there is some evidence that gay men have areas of more white matter than straight men, in at least some parts of the brain (called the corpus callosum).
*
Also demonstrating that gay men have no more of a sexual interest in children than do straight men are studies that have measured sexual responses directly: There exists a test, called a phallometric test, in which a man is shown images of adults and children, both male and female, while he wears a device on his penis to detect even very small changes in blood volume. . . .
When regular gay men and regular straight men (not offenders) are tested, gay men respond to images of children in exactly the same way that straight men do: very little.
*
Although it is reasonable to question why the Catholic priesthood appears to include so many pedophilic or hebephilic men, there is no scientific evidence that homosexuality is the answer, nor that fostering discrimination against gay men could be a solution.
Posted by Michael-in-Norfolk at Saturday, April 24, 2010

Pedophilia is a term that was re appropriated by women's and anti sex groups as a weapon against men, and more recently as a divisive tactic by gays against other gays.

You know who they are.

The only people I know who consider pedophilia and hemophiliac as sexual orientations or attractions are boy (and girl) lovers and Republicans.

Take that for what it's worth.