On the Road to GOP Extinction? 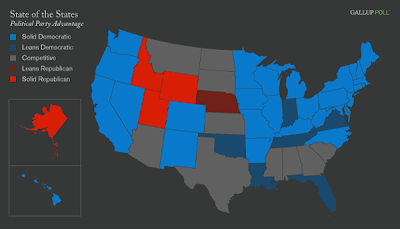 The Gallup folks have released the results of extensive new polling on political party affiliation and - if the GOP base lived in the real world - it should be very sobering to the GOP members of Congress who are showing that they prefer playing politics over doing what's right for the country. The map posted above speaks volumes. Here are some highlights from the study:
*
In 2008, Gallup interviewed more than 350,000 U.S. adults as part of Gallup Poll Daily tracking. That includes interviews with 1,000 or more residents of every U.S. state except Wyoming (885) and North Dakota (953), as well as the District of Columbia (689). There were more than 15,000 interviews conducted with residents of California, New York, Pennsylvania, Texas, and Florida.
*
This large data set provides the unique ability to give reliable estimates of state-level characteristics for 2008. Each sample of state residents was weighted by demographic characteristics to ensure it is representative of the state's population.
*
The accompanying map shows party strength by state for 2008, ranging from states that can be considered solidly Democratic (a Democratic advantage in party identification of 10 percentage points or more) to those that can be considered solidly Republican (a Republican advantage in party identification of 10 percentage points or more). States in which the partisan advantage is less than 5 points in either direction are considered "competitive." (The full data for all states appear at the end of the article.)
*
All told, 29 states and the District of Columbia had Democratic party affiliation advantages of 10 points or greater last year. This includes all of the states in the Northeast, and all but Indiana in the Great Lakes region. There are even several Southern states in this grouping, including Arkansas, North Carolina, and Kentucky.
*
In contrast, only five states had solid or leaning Republican orientations in 2008, with Utah, Wyoming, Idaho, and Alaska in the former group, and Nebraska in the latter.
Posted by Michael-in-Norfolk at Friday, January 30, 2009