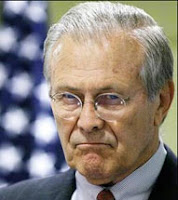 While there are many who say that prosecuting the Chimperator, Cheney, Rumsfeld and others in the former Bush administration would be divisive and take up precious time needed to save the U.S. economy, part of me worries that if these men are allowed to escape accountability for their deliberate misdeeds a terrible message will be sent to other nations as well as here at home to other future would be tyrants. Between the documented torture and countless needless deaths of U.S. service members and Iraqi civilians, the evidence cries out that someone be held accountable - especially for actions in clear violation of the Geneva Conventions. One United Nations official according to Raw Story says there is enough evidence to prosecute Rumsfeld. Here are some highlights:
*
Monday, the United Nations Special Rapporteur on Torture Manfred Nowak told CNN's Rick Sanchez that the US has an "obligation" to investigate whether Bush administration officials ordered torture, adding that he believes that there is already enough evidence to prosecute former Secretary of Defense Donald Rumsfeld.
*
"We have clear evidence," he said. "In our report that we sent to the United Nations, we made it clear that former Defense Secretary Donald Rumsfeld clearly authorized torture methods and he was told at that time by Alberto Mora, the legal council of the Navy, 'Mr. Secretary, what you are actual ordering here amounts to torture.' So, there we have the clear evidence that Mr. Rumsfeld knew what he was doing but, nevertheless, he ordered torture."
*
A bipartisan Senate report released last month found Rumsfeld and other top administration officials responsible for abuse of Guantanamo detainees in US custody.It said Rumsfeld authorized harsh interrogation techniques on December 2, 2002 at the Guantanamo prison, although he ruled them out a month later.The coercive measures were based on a document signed by Bush in February, 2002.
Posted by Michael-in-Norfolk at Tuesday, January 27, 2009