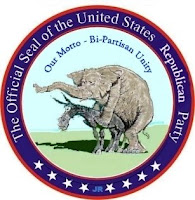 Even as the members of the Congressional GOP continue to do all they can to delay and undermine Barack Obama's efforts to get an economic stimulus package passed by Congress, the fruits of the GOP's failed economic and deregulation obsession continue to come home to roost in the form of more lost jobs and struggling companies. Despite the deteriorating situation, the GOP's cut taxes mantra seems to be all they know how to parrot. Of course, many in the Christianist base regularly oppose any government programs that would help the unfortunate or down trodden - something I find hard to reconcile with alleged Christian beliefs. As the Washington Post is reporting, yesterday was a blood bath in terms of job cuts and unless something is done quickly to turn the situation around the downward spiral will continue. Also to be considered in this country is the fact that loss of a job also frequently means that one loses health care insurance as well. Here are some highlights on the latest bad news which seems to mean nothing to today's GOP:
*
The nation's employers, including some of its largest and most sturdy, announced plans yesterday to slash more than 55,000 jobs, a staggering one-day toll that highlighted how quickly layoffs are accelerating and how widely misery is spreading throughout the labor market.
*
The cuts extended to companies that were once considered bright spots in the U.S. economy. Construction equipment maker Caterpillar, whose business last year was bolstered by strong exports, said it would cut 20,000 jobs. Pfizer, one of the giants of a health-care sector that had until recently seemed immune from the downturn, said it would cut 8,000.
*
In all, 22 of the 30 companies that are part of the Dow Jones industrial average have announced job cuts since the economy took a nosedive in October. Analysts say they've been surprised by just how quickly those cuts have added up. The number of people receiving unemployment insurance benefits now stands at 4.6 million, the highest level since 1982.
*
"These are not just numbers on a page," President Obama told reporters at the White House yesterday, as he urged Congress to pass his economic stimulus package. "These are working men and women whose lives have been disrupted. We owe it to each of them, and to every single American, to act with a sense of urgency and common purpose."
*
The job cuts announced yesterday "are the predictable consequence of a quickly unraveling economy affecting all sectors and segments of the workforce," said Lawrence Mishel, the president of EPI. "Unfortunately, the rise in unemployment we've already had may only be halfway to where we're heading."
*
While layoffs by big names attracted the most attention yesterday, workers at thousands of smaller firms are losing their jobs as well. Small companies with 1 to 49 employees shed 281,000 jobs in December, according to a report released this month by payroll services firm Automatic Data Processing. Medium-size firms with 50 to 499 employees cut 321,000. Large companies with more than 499 workers lost 91,000.
*
For the next six months, many economists do not expect the pace of layoff announcements to let up much. "There is nothing in the economic tea leaves that suggest someone is going to be hiring. This is a broad-based economic slump. From pharma to industrial to housing to telecommunications, every aspect of this economy is in a free-fall," said Richard Yamarone, director of economic research for Argus Research in New York. "There is no safe haven."
Posted by Michael-in-Norfolk at Tuesday, January 27, 2009